The president says that vandals, looters and violent criminals will face the full might of the law. 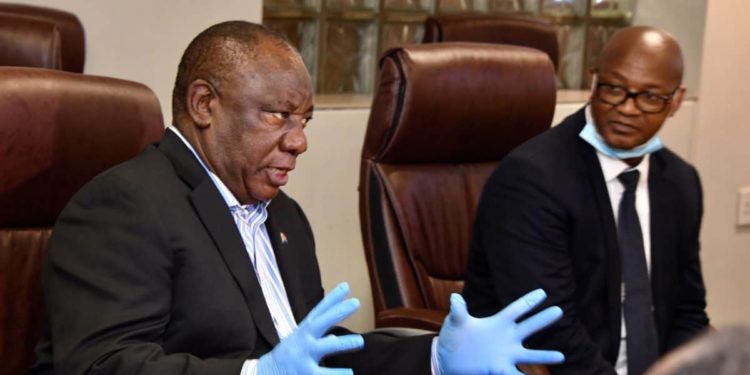 President Cyril Ramaphosa has condemned acts of criminality committed while the nation languishes under lockdown.

In his customary Monday address, From the desk of the President, Ramaphosa hit out at criminal elements which have sought to “exploit this crisis for their own sinister ends”. Just days after the president announced a two-week extension of the current lockdown, law enforcement agencies have been inundated with reports of vandalism, burglaries and violent crimes.

While Police Minister Bheki Cele has reported a decrease in violent crimes since the lockdown began — a fact which he attributes to the controversial prohibition of alcohol — state infrastructure has been hardest-hit under the cloak of lockdown.

Several schools, closed as a result of the lockdown, have been torched in recent weeks. Electrical infrastructure managed by Eskom has been torn apart, predominantly by cable theft, leading to blackouts in densely populated suburbs. Liquor stores have been looted and burgled; some incidents involve collusion with crooked cops.

Although violent crimes have been reduced, a number of incidents over the past week have shocked Ramaphosa. The president focused on three particularly brutal incidents, saying:

“Our hearts go out to the family of Mama Ngenzeni Zuma who was raped and killed in KwaZulu-Natal last month by men who allegedly pretended to be soldiers to gain entry into her home.

We feel the pain of the family of 14-year-old Simphiwe Sibeko who went missing from her Soweto home, and whose body was found dumped in bushes last week.

As a nation, we are saddened at the death of Constable Percy Ramalepe who was shot and killed while attending to a domestic violence call in Johannesburg last week.”

Ramaphosa also elaborated on the issue of Gender-Based Violence (GBV), noting that the National Command Centre had seen a massive spike in reports since the lockdown began. Ramaphosa said the rise correlated with women being trapped in their homes, as a result of the lockdown, with abusive partners.

Ramaphosa announced that, because of the grim prospects many women face under lockdown, regulations would be amended to better assist victims, or even potential victims, of GBV. Ramaphosa said:

“We recognise since people may not leave their homes, women and children in abusive situations are vulnerable. Survivors of violence may not have access to phones or airtime, or public transport to take them to a police station, shelter or a doctor.

To this effect the Interim Steering Committee on Gender-Based Violence and Femicide, in consultation with civil society organisations is developing guidelines and protocols for GBV management in the context of COVID-19.”

Furthermore, Ramaphosa issued a stern warning to criminals who sought to exploit the national lockdown. With an intensified approach to enforcing lockdown regulations, overseen by the South African Police Service (SAPS) and National Defence Force (SANDF), the president warned that law enforcement will adopt a zero-tolerance approach to criminality, saying:

“I have a message for those callous criminals who think they can take advantage. The criminal justice system is not on leave. Our law enforcement authorities will deal with those who transgress the law. You will be arrested, you will be tried and you will be put behind bars.”