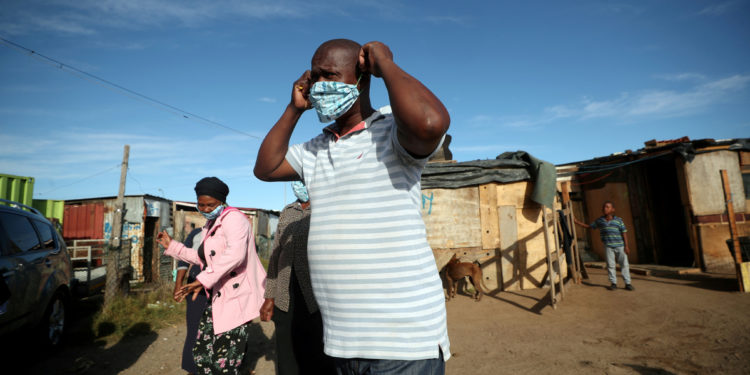 Community volunteers put the masks on as they prepare to distribute food packages during a 21-day nationwide lockdown aimed at limiting the spread of the coronavirus disease (COVID-19) in a township in Cape Town, South Africa, April 17, 2020.

With the newly-added cases and deaths, the country now has a total of 4,793 cases and 90 deaths, Mkhize said in his latest update on the pandemic.

“We regret to report further three deaths: two from the Western Cape and one from KwaZulu-Natal,” he said, adding that all the three victims had underlying conditions.

As massive community testing continued, a total of 178,470 tests have been conducted, of which 9,827 were done in the last 24 hours, he said.

Also on Monday, Mkhize told Parliament at a virtual meeting that outbreaks at workplaces in Western Cape have made the province the epicenter of the virus, overtaking Gauteng.

As of Monday, Western Cape has 1,737 cases, the highest number among all nine provinces, followed by Gauteng with 1,353 and KwaZulu-Natal with 902.

Mkhize said the Eastern Cape has also seen a sharp rise in cases due to outbreaks in prisons and infections linked with public gatherings, particularly funerals.

The Eastern Cape recorded a total of 588 cases as of Monday, Mkhize said.

“We’re seeing changes in the outbreak on a day-to-day basis,” he said.