The fire has affected both the Old Assembly Wing and the National Assembly Wing of the parliament, which also houses the upper house, National Council of Provinces. 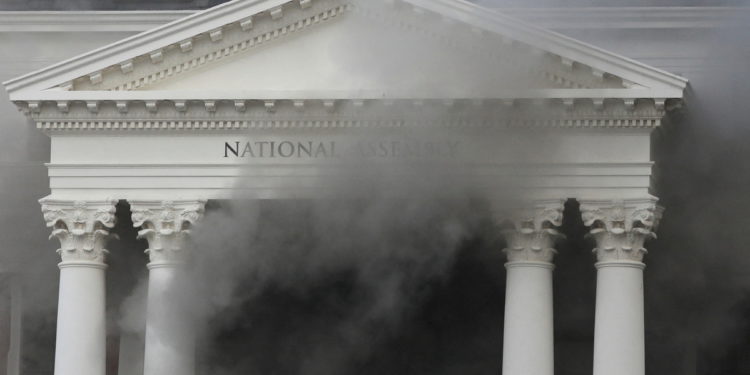 CAPE TOWN – The interior of South Africa’s National Assembly, the lower house of the parliament, was “extensively destroyed” by a fire that broke out early Sunday, a local official said Monday morning.

As of 6:50 am (0450 GMT) Monday, firefighters have been working at the fourth floor of the National Assembly building, which is still smoldering, said Jean-Pierre Smith, Cape Town’s mayoral committee member for Safety and Security.

The fire at the rest of the building has been brought under control and the number of firefighters has been reduced from 20 to 10, he said, adding that he hopes the fire would be put out over the next two to three hours.

No one is injured, he said.

The cause of the fire is still unknown. One person has been arrested in connection with the fire.

Initial reports indicated that the fire started at the hall of the Old Assembly building, then spread to the National Assembly, South African President Cyril Ramaphosa told media outside the parliament.

He promised an extensive investigation into the fire when visiting the scene. “We need to go a lot deeper, a lot deeper into how this type of event can take place and what measures we will need to take going forward,” he said.