This follows a report by the inter-governmental organization dubbed the 2020 Synthesis Report on the State of Food and Nutrition Security and Vulnerability in Southern Africa. 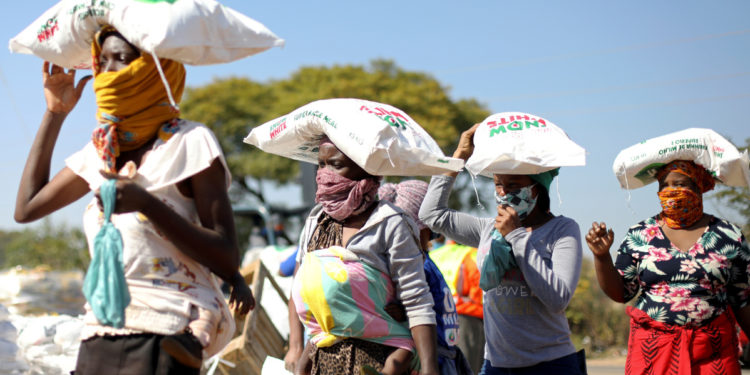 Southern African Development Community member states have been urged to strengthen mechanisms to mitigate the impact of novel coronavirus, as 45 million people across the region face increasing food insecurity.

The report revealed that the number of food-insecure people, lacking reliable access to a sufficient quantity of nutritious food, has increased by almost 10 percent in 2020, compared with the data provided at the same time last year.

It projects the number of food-insecure people to rise further because the full impact of coronavirus on the urban poor is yet to fully materialize alongside the approaching lean season between November and January.

Designated as a climate “hotspot” by the Intergovernmental Panel on Climate Change, Southern Africa is prone to recurrent extreme climatic shocks and has experienced normal rainfall in only one of the last five cropping seasons.

Common climate-induced shocks, economic challenges and poverty have been further exacerbated by the devastating impact of coronavirus on communities, which has caused severe socio-economic impacts due to loss of livelihoods, employment opportunities and remittances, as a result of lockdowns and other movement restrictions.

This has been particularly evident in the urban poor, who rely heavily on livelihoods from the informal sector and local markets, which were forced to close temporarily as a result of lockdown measures.

The report said children under the age of five are predominantly fed a poor diet and nine out of the 16 member states have reported stunting rates above 30 percent, while micronutrient deficiencies are widespread.

As more restrictions have been put in place by member states, food diversity has been constrained, inaccessible and unaffordable to the most vulnerable households.

There is a risk that households will be forced to adopt negative eating practices, including reducing frequency, quantity and quality of foods, to adapt to the lockdown and other impacts of other measures, the report said.

The food and nutrition security of school-aged children has been particularly affected during the pandemic.

The report said disruption and closure of schools and school meal program in the region due to coronavirus will have a negative impact on the adequacy of food and nutrition services to children.

According to the United Nations World Food Program global monitoring report on school meals, it is estimated that about 21 million school children in the region will not have access to regular school health and nutrition services due to the school closures.

The Southern African Development Community is calling on member states to address the challenges using short-term measures, such as social protection program to support those immediately affected.

This is in addition to more medium and long-term strategies focused around in certain areas, including the maintenance of domestic and international supply chains and incentives for the diversification of agricultural production.

It urged member states to strengthen mechanisms that mitigate the impact of coronavirus from disrupting the food supply chains and associated livelihoods, by minimizing disruption to farming operations, enabling access to production inputs and critical emergency veterinary drugs, as well as produce markets by farming households.

The report also recommended development and implementation of a regional strategy on hygiene and hand washing with soap.

This should not only focus on risk communication and community engagement but also include support for provision of hand washing infrastructure and products up to household level, including stimulation of supply chains, deployment of fiscal mechanisms, such as value-added tax, and other social protection mechanisms.

It also recommends addressing market-related challenges for small scale farmers by improving and developing road infrastructure to improve farmers’ access to both input and output markets, as well as providing incentives for input suppliers and other service providers to move closer to farmers.

This is in addition to promoting community irrigation schemes and rainwater harvesting, as well as constructing dams to ensure year-round agricultural production.