“The World War for Bread is already underway and we must stop it,” — Italian Foreign Minister Luigi di Maio

Coups and terrorism threaten Africa if the conflict in Ukraine does not end soon, Rome warns 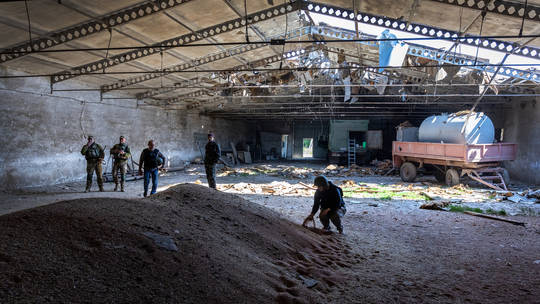 If the military conflict in Ukraine does not come to an end soon, the resulting famine could trigger political instability in Africa, Italian Foreign Minister Luigi di Maio warned during a press conference on Saturday. He also suggested “the proliferation of terrorist organizations and coups d’etat” may be on the horizon.

“The World War for Bread is already underway and we must stop it,” he said.

Di Maio urged Russian President Vladimir Putin to “come to the table” and reach a peace agreement as soon as possible, including a specific agreement on wheat.

“We must not forget that there are 30 million tons of grain blocked in Ukrainian ports by Russian warships. What we are doing is working to ensure that Russia unblocks the export of grain in Ukrainian ports, because at this moment we risk new wars breaking out in Africa.”

READ MORE: After one hundred days of war, Ukraine’s health system is under severe pressure: WHO

Italian PM Mario Draghi has previously asked Putin to allow grain exports from both Russia and those parts of Ukraine under Russian control. On Friday, the latter told Russian TV that shipments could be conducted via Belarus.

“If someone wants to solve the problem of exporting Ukrainian grain – please, the easiest way is through Belarus. No one is stopping it,” Putin explained. “But for this you have to lift sanctions from Belarus.”

He has also denied that Ukraine’s wheat is blocked by Russian warships. Putin insisted that Kiev has mined its own harbors extensively, creating serious danger for ships seeking to access Ukrainian ports.

Meanwhile, Kiev has been shipping its grain out via the Romanian port of Constanta and over land to Europe – a much less efficient route, as far less can be transported at a time. With European countries able to pay more for the crop, smaller quantities are likely to make their way to northern Africa, and leaders from the continent have pleaded with Europe to lift sanctions on Russia which make it more difficult for them to buy food via the SWIFT system.

Di Maio has called for Putin to sign a ceasefire agreement allowing Italy to evacuate civilians in eastern Ukraine, though it’s not clear if this is in addition to existing humanitarian corridors set up by Russia and the Donetsk People’s Republic.

Ukraine produces 15% of the corn and half of the sunflower oil on the world export market and nearly 10% of global wheat exports, making it a major link in the global food chain.