Hours after Ankara’s threat, the LNA announced that its air defenses shot down seven Turkish drones in various regions in less than six hours. 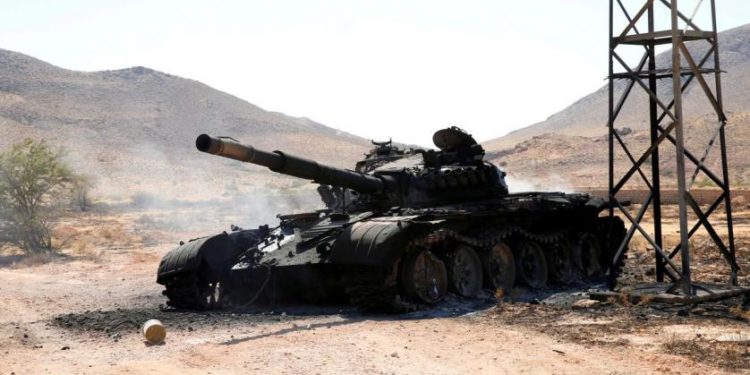 The Libyan National Army (LNA), commanded by Khalifa Haftar, announced on Friday the downing of seven Turkish drones, in what was interpreted as a response to Ankara’s warning to the military of “grave consequences” if its interests in Libya were attacked.

The LNA said drones of the “Turkish invaders” were downed in the Qaryat and Abou al-Gharib regions south of Bani Walid and Tarhuna cities. Another aircraft was shot down over Wishka.

This takes to 90 the number of drones downed by the LNA since it launched its operation to liberate Tripoli in April 2019.

The LNA also announced the destruction of 20 Government of National Accord (GNA) armored vehicles in an airstrike in Gharyan city.

Politically, US Secretary of State Mike Pompeo criticized the flow of weapons to Libya.

Pompeo placed a phone call to GNA chief Fayez al-Sarraj to “reiterate US opposition to the continued level of weapons and munitions being brought into the country,” the State Department said.

The statement was seen as a jab at Turkey that has been backing the GNA with weapons.

Pompeo and Sarraj “emphasized the importance of an immediate halt to the fighting and return to political dialogue,” a statement said.

Fighting on Thursday centered around al-Asbiah, some 120 kilometers west of Tripoli. LNA spokesman Ahmed al-Mismari said the military carried out a series of airstrikes against Turkish President Recep Tayyip “Erdogan’s takfiri militias” in Asbiah and the surrounding regions.

Mismari said four warplanes have become newly available after they were out of service for a long time. He added that LNA teams succeeded in refurbishing them, without specifying the type of aircraft, but promising “excellent results” from them.

“The time has come for them to be used at their maximum fire power,” he stressed.

The GNA, meanwhile, did not announce any new accomplishment on the ground, with a spokesman calling on the residents of Tarhuna, Wishka, Mizdah and Sirte to steer clear of LNA positions. The GNA will provide safe passage for trapped civilians.

In Tarhuna, after days of military buildup, the GNA said it was blocking the coastal road stretching from Castelverde to al-Qoaah, claiming it was protecting civilians from the LNA’s arbitrary shelling.

The GNA had recently launched an attack in an attempt to recapture Tarhuna from the LNA.

The United Nations Support Mission in Libya, meanwhile, expressed its concern over the latest fighting in the country.

In a terse statement, it said it “is following with great concern the military developments and mobilization around the city of Tarhuna. UNSMIL reminds all parties of their obligations in accordance with international humanitarian law and warns against any acts of retribution, including attacks against civilians, extrajudicial punishments, looting, robberies and torching of public and private properties. UNSMIL calls on all parties to refrain from military escalation and resort to peaceful means.”