Ukrainian general claims to know when Russia will ‘invade’

In an interview with London newspaper The Times, Alexander Pavlyuk, a lieutenant-general in the Ukrainian army, has claimed that Russia could invade Ukraine on February 20 – the day the 2022 Winter Olympics wrap up in Beijing. 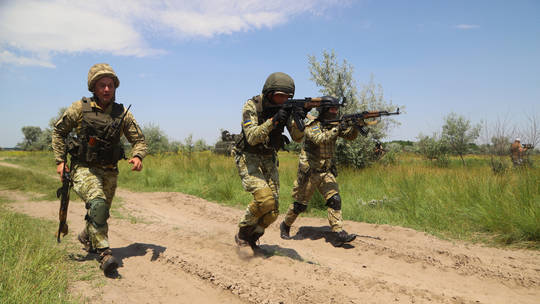 Pavlyuk described it as a “date that concerns us,” surmising that the Kremlin would not want to spoil the sporting event hosted by China.

The Ukrainian commander went on to issue a warning to Moscow, claiming that Ukrainians were “ready to tear apart Russians with their bare hands.” The comments were made in the wake of Kiev publicly complaining it hasn’t gotten the military aid and preventive sanctions on Russia it wanted.

Pavlyuk wasn’t alone in linking a potential conflict to the Games. A separate report by Bloomberg on Saturday claimed that Chinese President Xi Jinping may have personally asked Putin to hold off the alleged attack, so as not be “kicking off an invasion of Ukraine in the middle of Xi’s Olympic moment.” The report did not provide evidence, citing “one diplomat in Beijing who asked not to be identified talking about such scenarios.”

The Chinese Embassy in Russia responded to Bloomberg’s report late on Saturday, calling it “fake” and a “provocation.”

READ MORE: The head of the German Navy, resigns over Putin ‘respect’ comments

Pavlyuk, 52, who is said to command a force of 52,000, told the Times’ war correspondent, Anthony Loyd, that Ukrainian authorities had begun handing out weapons to another 100,000 volunteers in areas deemed most likely to fall to the Russians, should Kiev’s and its Western allies’ invasion claims ever materialize. The so-called territorial defense units are meant to wage a “protracted insurgency-type war,” he said. According to the lieutenant-general, the main criterion for getting firearms was the recipient’s readiness to fight.

The main goal for the Ukrainian army would be to inflict heavy casualties on the invading troops, Pavlyuk continued, alleging that this could turn the Russian tide. According to the military commander’s belief, President Vladimir Putin harbors plans to “wound the whole country, and through that wounding to manipulate Ukraine as they desire.” Pavlyuk claimed that major Ukrainian cities like Dnepropetrovsk, Odessa and Kharkov were the prime targets, with Russia allegedly seeking to take away Ukraine’s industrial capabilities and its access to the Black Sea.

The lieutenant-general then went on to berate Ukraine’s western allies over what he saw as a lack of military support for the country. Some of Pavlyuk’s strongest criticisms were reserved for Germany, which, according to him, was only paying lip service to Kiev, while consistently refusing to furnish the Ukrainian army with weapons, or provide guarantees that it would ditch the Nord Stream 2 gas pipeline in case war breaks out. Meanwhile, the US and the UK were described as being among Ukraine’s few reliable partners, according to Pavlyuk.

On Monday, the British government gave the green light to sending anti-tank weapons to Ukraine in response to “the increasingly threatening behaviour from Russia.” The US has shelled out some $2.7 billion in military assistance for Kiev since 2014. Berlin on Friday said that sending offensive weapons to Kiev was out of question.

For several months now, Western media and top politicians alike have been amplifying the Ukrainian government’s claims of an imminent Russian invasion of the country. Moscow has strongly denied the allegations, branding them “fake news,” and in turn claiming that Kiev and its western allies may be preparing a false-flag operation in eastern Ukraine to try and provoke a Russian military response.