The order－which applies to flights operated by Air China, China Eastern Airlines, China Southern Airlines and Xiamen Airlines－was issued "in response" to measures by Chinese aviation authorities that asked US carriers to cancel the same number of flights, according to the department. 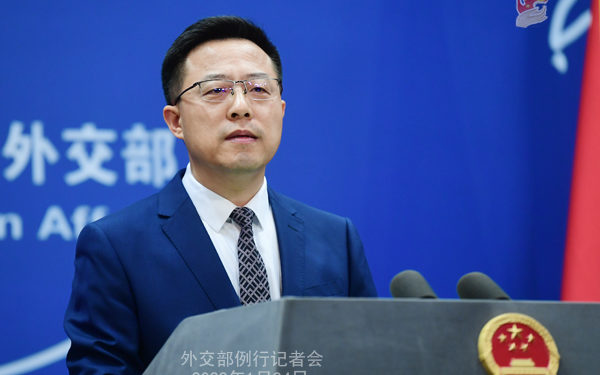 China has urged the United States to stop disrupting and restricting normal people-to-people exchanges between the two countries by politicizing the COVID-19 pandemic prevention measures of airlines, after the US government announced the suspension of 44 China-bound flights from the country.

“Driven by its selfish pursuit of exceptional and special treatment, the US suspended passenger flights by Chinese airlines without any reason and disrupted their normal operation,” Foreign Ministry spokesman Zhao Lijian said at a regular news briefing on Monday.

Such arbitrary and irresponsible practices are in disregard of the Chinese and foreign passengers’ health, he added.

On Friday, the US Transportation Department said it would suspend 44 passenger flights by Chinese airlines between late January and the end of March.

The order－which applies to flights operated by Air China, China Eastern Airlines, China Southern Airlines and Xiamen Airlines－was issued “in response” to measures by Chinese aviation authorities that asked US carriers to cancel the same number of flights, according to the department.

Zhao noted that China has applied a “circuit breaker” policy on inbound international passenger flights since 2020 with the purpose of curbing international transmission of the virus to the greatest extent and protecting the health of people in all countries.

“The policy exactly shows our consideration for the public interests of all parties,” Zhao said, adding that it also won respect and cooperation from the vast majority of airlines in many countries.

Liu Pengyu, a spokesman for the Chinese embassy in Washington, was cited in media reports as saying on Friday that the global surge in virus cases had led to an increase in cases being brought into China on international flights and the “circuit breaker” was designed to limit such cases.

“The policy has been applied equally to Chinese and foreign airlines in a fair, open and transparent way,” he said. “It is very unreasonable for the US to suspend Chinese airlines’ flights on those grounds. We urge the US side to stop disrupting and restricting normal passenger flights operated by Chinese airlines.”

Under China’s “circuit breaker” policy, airlines must suspend flights on a route for a week if at least five passengers test positive for the coronavirus. If the number exceeds 10, the airline must suspend the flights for four weeks.

READ MORE: “Let us change the narrative on Africa in the United States” — Dr Akinwumi A. Adesina

According to a notice issued on Jan 21 on the website of the Civil Aviation Administration of China, the policy was recently applied to five China-bound passenger flights from Iraq, the US, Canada, Australia and France.

Faced with a new wave of COVID-19 infections caused by the Omicron variant, Zhao, the ministry spokesman, called on all countries to strengthen international communications and cooperation to effectively prevent cross-border transmission of the virus and win an early victory against the pandemic.