Washington: US reacts to partnership between Russia & China

The two countries have proclaimed a joint stance on the expansion of NATO – one of the top issues in the strained relations with the West for Moscow. 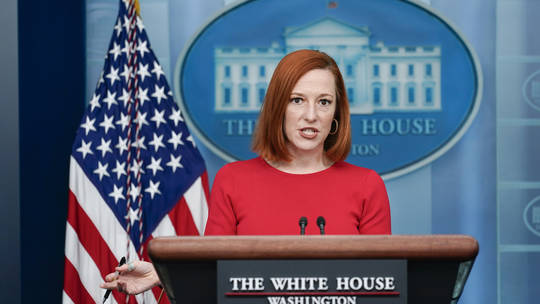 The US has a relationship with Beijing of its own, White House Press Secretary Jen Psaki said during a press briefing on Friday, when asked about President Biden’s take on the strengthening ties between Russia and China “through the lens of his broader foreign policy goals, agenda items.”

“Well, we – the president views it – views it as we have our own relationship with China,” Psaki said, somewhat dodging the original question and straying into the issues related to the situation around Ukraine.

“We’ve also conveyed that a destabilizing conflict in Europe would impact China’s interests all over the world. And certainly, China should know that,” she stressed.

The situation around Ukraine has been one of the centerpieces of US foreign policy over the past few months, with top officials and media repeatedly warning of an allegedly impending “invasion” of the country by Russia. Moscow has consistently denied having any plans of the sort.

Earlier in the day, Russia and China released a large joint statement announcing their plans to deepen their cooperation in a vast number of areas. The statement came amid a visit of Russia’s President Vladimir Putin to China at the invitation of his counterpart, China’s President Xi Jinping.

“Friendship between the two States has no limits, there are no ‘forbidden’ areas of cooperation,” the statement reads.

The two countries have proclaimed a joint stance on the expansion of NATO – one of the top issues in the strained relations with the West for Moscow. “The parties oppose the further expansion of NATO and call for the North Atlantic Alliance to refrain from ideological approaches from the time of the Cold War,” the statement reads, urging the US-led bloc “to respect sovereignty, security, [and]the interests of other countries.”