The project, undertaken by China Jiangsu International, has been progressing despite delays caused by the COVID-19 pandemic. 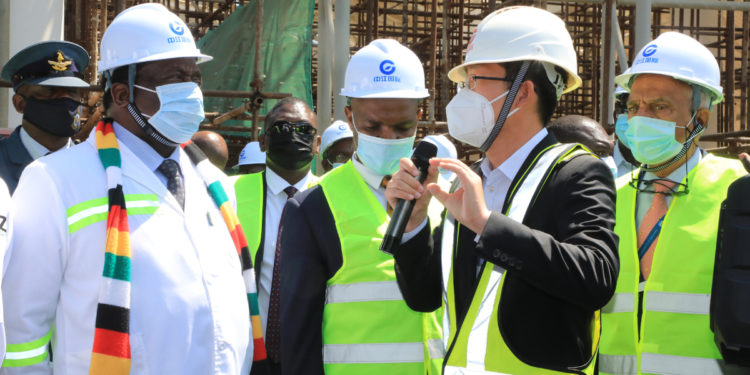 Work is proceeding smoothly on an expansion of Zimbabwe’s biggest airport that will more than double the number of passengers the facility in Harare can handle.

The $153 million project, which received funding from the China Export-Import Bank, will add a new international terminal building and aprons and four new bridges, among other improvements.

Zimbabwean President Emerson Mnangagwa, who toured the site on Wednesday, expressed hope that the national capital’s revamped airport will attract more airlines and the visitors they carry. He also spoke of the gains in store for tourism and trade.

Mnangagwa said the construction of the terminal building at Robert Gabriel Mugabe International Airport is on course to be completed late next year. The airport will be able to handle 6 million passengers a year, up from the current capacity of 2.5 million.

“It is my anticipation that we will be able to attract more airlines and increase frequency of the existing flights when this project is completed,” Mnangagwa said.

He praised China’s support for the expansion project under the two countries’ comprehensive and strategic partnership framework, saying it had demonstrated the improved bilateral relations.

“We are happy that this airport, after completion, will match any other airport in the world in terms of facilities and the design to attract airlines coming here, as well as our own people coming here to watch as the planes arrive and have a good time,” Mnangagwa said.

The project, undertaken by China Jiangsu International, has been progressing despite delays caused by the COVID-19 pandemic. It is the company’s second airport project in Zimbabwe after it upgraded the Victoria Falls International Airport in 2016. That airport’s annual passenger-handling capacity has tripled to 1.5 million.

Included in the project are the provision of a secondary radar system, airfield ground lighting and a communication system.

The airport expansion will be instrumental in the revival of Zimbabwe’s aviation industry after the pandemic upheavals. The national carrier Air Zimbabwe resumed domestic and regional flights in June. It had suspended flights for most of the past year.