GOVERNMENT Saturday deployed the army to help police enforce its 21-day national lockdown which was being violated by sections of the population in parts of Harare’s high-density suburbs. 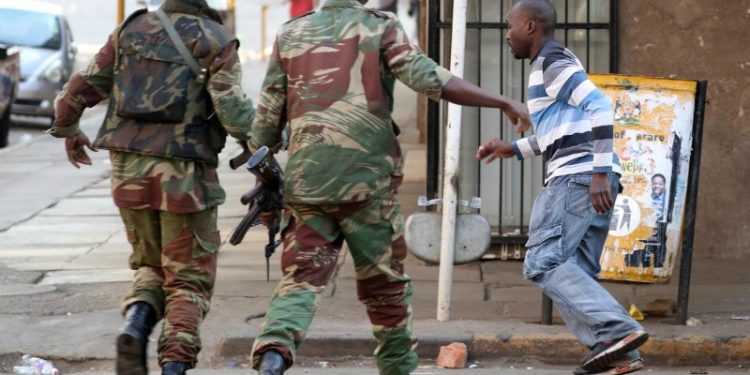 The lockdown is part of government measures to try and control the spread of coronavirus, which has seen nine cases confirmed and a single related death inside the last 15 days.

Soldiers and police officers descended on shopping centres and residential areas to drive off many people into their homes.

Following the lockdown order announced by President Emmerson Mnangagwa two Fridays ago, many people continued to carry out their business in defiance of the order.

Some vendors continued to sell their wares within high density suburbs while some people still went and queued for basic commodities such as mealie meal in defiance of health authorities’ recommendations for individuals to maintain social distancing.

But the situation ‘moved to another level’ Saturday when soldiers joined the police to drive off people from the streets.

The operation started Friday evening after Mnangagwa’s state of the nation address.

In Mabvuku and Tafara townships, municipal police were moving around ordering vendors off their stalls.

“There are no vendors anymore. They have been driven away by municipal police and we failed to get any vegetables or relish for today,” said Pamela Makoko, a resident.

Many Zimbabweans now depend on vegetables as relish such as meat has been priced beyond their reach.

In Budiriro, many remained indoors amid reports soldiers and the police had been on the ground since Friday night.

Meanwhile, bigger retailers were still opening their shops from 9am to 3pm and were making efforts to ensure customers maintained the recommended social distancing.