The commitment was taken during the just ended 3rd Lake Chad Basin Governors’ Forum which held in Yaounde, Cameroon. It also had in attendanceinternational partners. 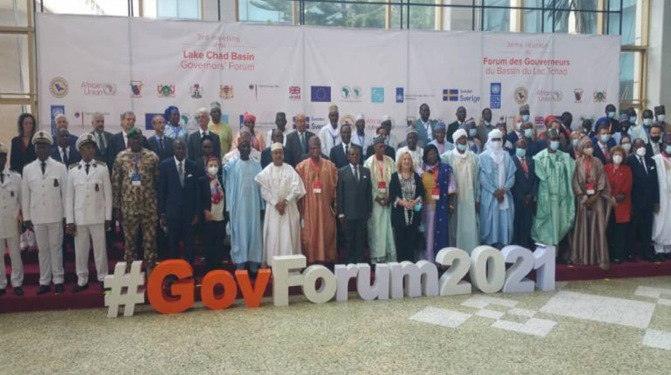 Governors of eight the five countries sharing the border with the Lake Chad basin resolve to remain committed to strengthening cross-border security cooperation in order to facilitate cross-border trade, improve economic recovery and enhance people’s livelihoods in the troubled region.

The commitment was taken during the just ended 3rd Lake Chad Basin Governors’ Forum which held in Yaounde, Cameroon. It also had in attendanceinternational partners. The gathering hinged on discussing issues regional security cooperation in the Lake Chad Basin area as well as chart a path to improved stability within the area.

Closing the forum Tuesday on behalf of Cameroon’s Prime Minister, the country’s Minister of Economy, Planning and Regional Development, AlamineOusmaneMey, said with regards to the Lake Chad Basin, affected and perturbed by the atrocities of the Boko Haram sect, actions undertaken both at the state and sub-regional levels in favour of the stabilization and recovery of the area are yielding encouraging fruits.

“It is therefore necessary to resolutely continue the concerted implementation of the Regional Strategy for the Stabilisation, Recovery and Resilience,” Minister Alamineinsisted.

He said collaboration, cohesion and consultation between the various actors will ultimately make it possible to inexorably ensure a rapid transition from stabilization towards inclusive recovery on the path to sustainable development with appropriate humanitarian action at the base.

A joint communiquewas issued at the end of the high-level regional forum. The governors agreed to strengthen ownership of the Regional Stabilisation Strategy and Territorial Action Plans, and ensure that their implementation is primarily the responsibility of the Governors of the most affected states.

They also resolved that humanitarian, development and peace actors should align their activities with the priorities of the Governments and the people of the region;agreed to remain firmly committed to joint efforts to stabilise, consolidate peace and foster sustainable development throughout the Lake Chad Basin through the promotion of dialogue and cross-border cooperation while at the same time playing their role as the main mechanism for cross-border cooperation in the implementation of the Strategy and work closely with key stakeholders in the Lake Chad Basin.

The governors meanwhile resolved to continue joint reflection and information sharing, to strengthen cross-border collaboration and mutually benefit from existing good practices in the region.

They have agreed to ensure the systematic and effective implementation of the Territorial Action Plans,TAPs that were launched at the third Forum, in line with local and national development plans, and periodically monitor progress.

The governors expressed the need to work with partners to redouble efforts to empower and provide more opportunities, especially employment opportunities for women and youth as well as facilitate the contributions and engagement of civil society organisationsin the implementation and monitoring of Territorial Action Plans, TAPs.

They emphasised the need to increase the hydraulic capacity of Lake Chad by improving the overall water flow of the lake in an environmentally friendly manner.

A pledge was also made to broaden and deepen partnerships in the region to secure the resources needed to scale up the interventions without which the Strategy and Territorial Action Planscannot be optimally implemented.