The Republic of Liberia has lost her full membership rights at the African Union. 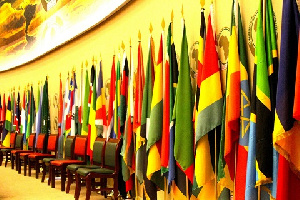 Is now an observer at the African Union, one without a voting right, from being a founder to a shocking rejected stone, one who understood the purpose for which the organization was founded.

Over the past three years, Liberia has struggled with meeting up with every single report to be submitted to the AU. These reports are the core responsibilities of being a member country, some of these reports either come in later or never do, with key diplomats at the AU headquarters truly bothered about the ministry of foreign affairs in Liberia and the Minister not understanding the core function of international diplomacy, starting with the African Union.

Fingers pointing have never stopped, though the situation is pathetic and disgraceful, it is not known why it had to get thus far, the past administration of former President Ellen, left with about $800,000 united states dollars to the AU and the present administration have feared or even performed worst. These non-actions to international responsibilities, only closes the nation’s doors to benefiting and having a voice around graceful tables, most especially when we have had major scandals at the passport office in Liberia, which led to the suspension of the former Director of Passport, it has also placed the Nation’s credit rating on a downward low, limiting the capacity to borrow above a certain limit.

Former Minister Findley who is now contesting for a senate seat in the Liberian senate is said to be a major point of interest in understanding the issues which lead to this unfortunate situation, which a founder of the African union, cannot today vote on nothing and have a period upon which even the observer statues may also be lost.

It must be remembered, most of the discussions were held in Sanniquellie, Nimba county in Liberia which were finalized in addis and then where the Organization was formed with head quarters stationed today and in 1979, Liberia finally was able to host the general assembly or summit for the first time.

Pundits are of the Opinion, this partial expulsion or demotion, does not and should not represent the position Liberia should be found at no time in her history. Today the AU is composed of 55 countries and Liberia was one of the most important members.

Observer status is a privilege granted by some organizations to non-members to give them an ability to participate in the organization’s activities. … Observers generally have a limited ability to participate in the IGO, lacking the ability to vote or propose resolutions. It is with these in mind that Liberia must return as quickly as possible to the full membership statues of the African Union for the good of the nation her people and humanity.

It must be known that as at today, shamefully a Nation who was a founding member of a major international Organization as Liberia, doe not have a permanent representative at the African union., this does not only spell doom of Liberia, but exposes the importance the Weah Led government attaches to international diplomacy and a clear understanding of the benefits therein.