Malabo: The Prince of Dubai arrives in Equatorial Guinea

His Royal Highness Sheik Ahmad Bin Dalkmook al Maktoom was received on thursday, 17th by the President of the Republic, Obiang Nguema Mbasogo. 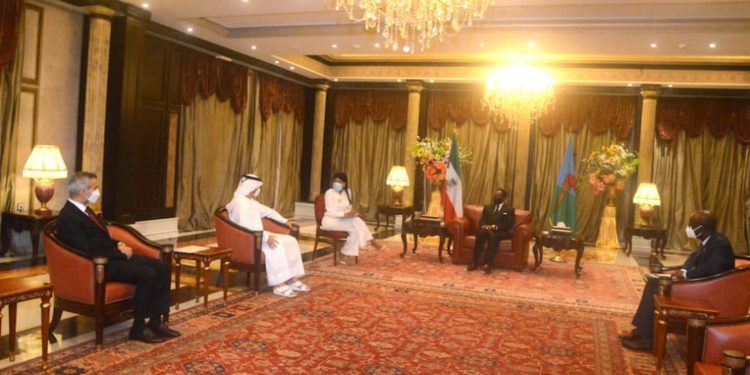 His Royal Highness Sheik Ahmad Bin Dalkmook al Maktoom has been in Malabo since the early hours of  Thursday at the People’s Palace, the Prince of the Ruling Family of the Dubai Emirates, was received  by the President of the Republic, Head of State and Government, His Excellency, Obiang Nguema Mbasogo.

The conversations between the two personalities focused on the consolidation of the Diplomatic Relations that unite the two Governments, with special attention in the sectors: education, agriculture, economy, among others.

The Minister of Finance, Economy and Planning, Cesar Augusto Mba Abogo, was the one  who  assisted the Head of State.

“Our conversation today with the head of state was to continue analyzing and addressing issues of great importance that we have planned and will benefit both countries. Although the Covid 19 pandemic has delayed the development of these works, our intention is to reactivate these sectors for the future of our peoples.

The last meeting between His Excellency Obiang Nguema Mbasogo and His Royal Highness, Sheikh Ahmed Al Maktoom, took place on August 11, 2018 here in Malabo and lasted a little over an hour. And the two personalities spoke about the start-up of the Afro-American University at La Paz as well as the predisposition of the Emirate of Dubai to invest in the field of electrical energy, especially in the continental part of the country..