Defying the weather as it threatened to rain, and it eventually did, fans thronged the airport to await their heroes 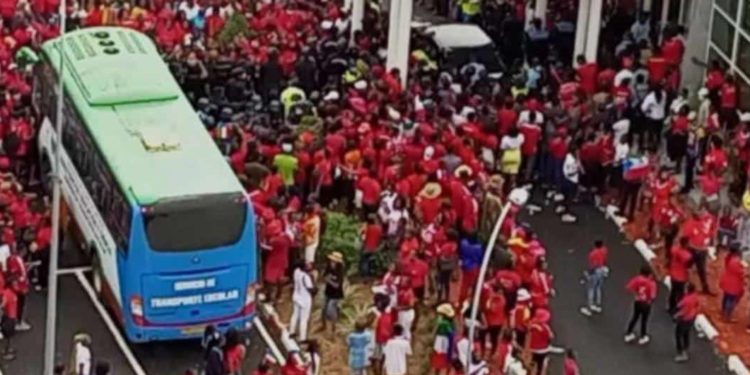 Excitement gripped the air in Malabo on Tuesday as the public awaited the homecoming of the Equatorial Guinean national team, Nzalang Nacional, following their string of wonderful and heroic performances at the ongoing African Cup of Nations in Cameroon. Although they were eliminated last Sunday in the quarter finals, the Nzalang Nacional had already captured the hearts of the whole populace.

Defying the weather as it threatened to rain, and despite that it eventually did, fans thronged the airport to await their heroes and give them a befitting welcome.

The chanting, dancing and jubilation soared when the airplane landed and the players, led by their Captain and fan favourite, Emilio Nsue, came into sight and began descending from the plane. Screams of ‘’Nsue! Nsue!! Emilio!!!’’ filled the air. It was such a joy for the fans to witness the arrival of their national team and the players, as the expressions on their faces portrayed, were surprised but also excited to have caused such a reaction back home with their performance in Cameroon.

They lapped up the admiration, praises and love showered upon them as fans tried to get a glimpse of them, touch them and those who were fortunate enough to get close, take selfies, and show appreciation for making the country proud.

The Vice-President of Equatorial Guinea, His Excellency, Teodoro Nguema Obiang Mangue, had taken to to his Twitter account to congratulate the national team before their arrival.

‘’I congratulate the Nzalang for the moments of joy that they have made us enjoy. You have honorably defended the colours of our flag. Your action in Cameroon shows that we must invest more in football. Equatorial Guinea awaits you with open hands like the heroes you are.’’

From the Santa Isabel International Airport, Malabo, the team went on a tour of the capital city, meeting fans everywhere they went. As they arrived the offices of the National Bank of Equatorial Guinea (BANGE), they met more fans as they were welcomed by the bank’s management. At that event, fans had more time to meet with the players, take pictures and create memories that can last a lifetime.

The day’s activities continued with a stop at the scenic Paseo Maritimo, where they had more fans waiting for them again. The celebrations didn’t end with the tour as a concert was held later on in honour of the Nzalang Nacional at the venue. Truly, this is one moment that will live forever in the hearts and minds of every Equatoguinean!