The Embassy also talked about connecting Dreams Hub with other hubs in Turkey for possible exchange of ideas, networking, and collaborations. 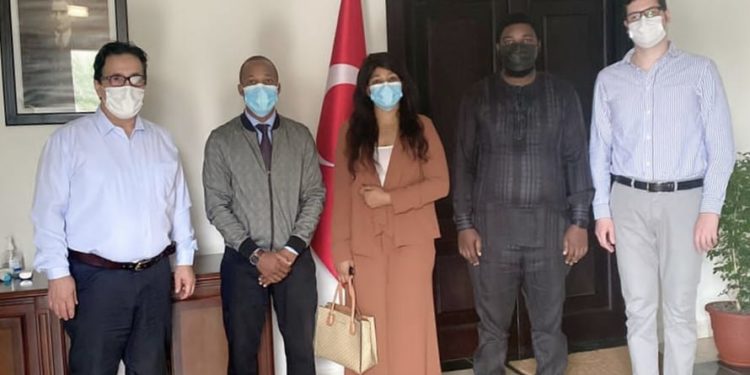 Dreams Hub Research and Innovation Center paid a working visit to the Embassy of Turkey on Tuesday 17TH of August 2021, meeting with The Counselor, Ersoy Yilmaz and Third Secretary, Mert Öz, continuing discussions on how best they both can collaborate considering the center’s programs and plans to grow the ecosystem.

One of such programs, Huevos de Cristal, which gives children between the ages of 7-13 the digital skills necessary to prepare them for tomorrow, was one of the major ones the Embassy seems to have taken an interest in. Set to celebrate its one-year anniversary next month, Huevos de Cristal, has had over 60 children pass through its program and in June, the program concluded plans to upskill another 100 children across the nation’s capital, Malabo. That phase of the program is already underway.

Mert Öz, who had earlier last week visited Dreams Hub and witnessed the current expansion going on there in order to facilitate more projects such as incubate more start-ups, create a co-working space, and have a center big enough to accommodate more children and youth for those classes, was left impressed with the vision shared by the Dreams Hub delegation. The delegation had, Oscar A. Nchaso Bekari, Founder and Director, Ivan Somo Bita Dougan, Project and Programs Manager, and Maria Nchaso, Communication and Marketing Manager.

‘’As we grow and expand our offerings, we need the support of well-meaning organisations and individuals. The Turkish Embassy here in have shown an interest in what we do, positively influencing lives and playing our role in nation building,” said Oscar Nchaso.

The Embassy also talked about connecting Dreams Hub with other hubs in Turkey for possible exchange of ideas, networking, and collaborations.

“It will be great to meet with other hubs who are in our line of focus as well. We are also really committed to improving lives of girls and women, and with technology, we are going to make that a reality. Meeting other hubs who have done similar things in their environment such as fund women owned businesses, provide mentoring and more, will be wonderful,” Mr. Nchaso concluded.