The government said 6,700 people died in Guayas province in the first two weeks of April. Cardboard coffins have been distributed amid a huge number of deaths. 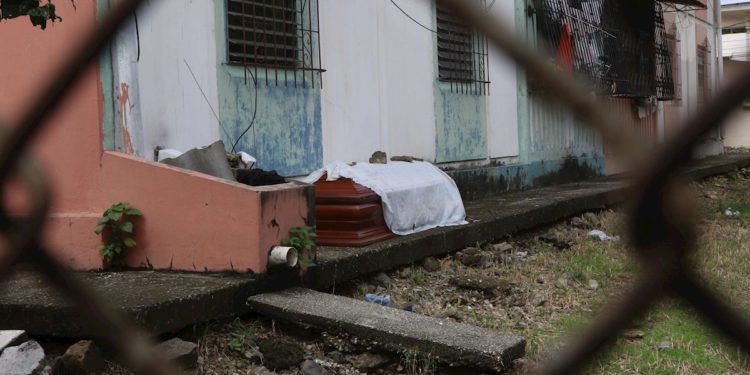 The government said 6,700 people died in Guayas province in the first two weeks of April, far more than the usual 1,000 deaths there in the same period.

Guayas is home to Guayaquil – the nation’s largest city and the part of the country worst-hit by Covid-19.

Footage obtained by the BBC showed residents forced to store bodies in their homes for up to five days.

They said authorities had been unable to keep up with the huge rise in deaths, leaving corpses wrapped in sheets in family homes and even in the streets.

Authorities last week began distributing thousands of cardboard coffins in Guayaquil. A dedicated helpline was also set up for families that needed a corpse removed from their home.

Jorge Wated, the head of a police unit created to tackle the problem, said earlier this week that 771 bodies had been removed from houses in the city.

According to the government’s figures, 14,561 people have died in Guayas province since the beginning of March from all causes. The province normally sees 2,000 deaths a month on average.

Ecuador as a whole has had 8,225 confirmed cases of coronavirus to date, according to Johns Hopkins University, though a lack of widespread testing means this is likely a significant undercount.

Across Latin America, Covid-19 has been dubbed a rich person’s disease. A virus introduced to the region by affluent parts of society who had been travelling abroad.

The case of Ecuador is no different but experts have suggested that the country’s deep ties with Spain and transport links between there and Guayaquil, Ecuador’s biggest city, could be partly responsible for higher numbers. Indeed, the first recorded case was of an Ecuadorean woman returning from Spain.

But the high death toll is also a devastating consequence of the combination of an overburdened healthcare system and a deeply unequal society which means not everybody is able – or willing – to socially distance and stop work.

Authorities argue they were quick to impose strict regulations and people chose to disregard measures but experts argue more could be done – and one thing that could help is testing. While Ecuador is not the worst offender in the region, low testing rates have made it very difficult to understand how the virus has moved through communities, some of which have been devastated by the high death toll.

Ecuador’s vice president, Otto Sonnenholzer, apologised to the nation earlier this month for the government’s slow response to the pandemic.

“We have seen images that should never have happened, and as your public servant I apologise,” Mr Sonnenholzer said.

Guayaquil is densely populated and has high levels of poverty, with many residents living in close proximity.