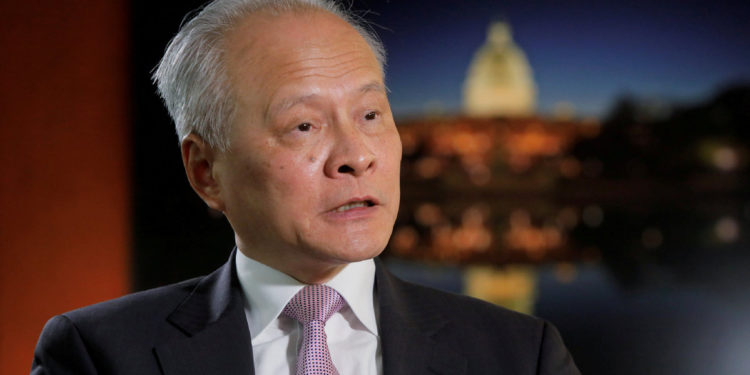 In an op-ed piece published in The Washington Post, Chinese Ambassador Cui Tiankai railed against what he said was “the absurd mind-set of ‘always blame China'”, which he said has been undercutting international efforts to curb the virus.

“Blaming China will not end this pandemic. On the contrary, the mind-set risks decoupling China and the United States and hurting our efforts to fight the disease, our coordination to reignite the global economy, our ability to conquer other challenges and our prospects of a better future,” Cui wrote.

“The United States would not emerge as a winner from this scenario,” he added.

US Secretary of State Mike Pompeo on Wednesday continued to fault China for the initial outbreak of the novel coronavirus and pushed back against suggestions that he and other Trump administration officials have issued conflicting statements about the exact origins of the outbreak.

Meanwhile, White House Press Secretary Kayleigh McEnany said at a news briefing Wednesday that the relationship between Washington and Beijing is one of “disappointment and frustration”. McEnany also accused China of withholding information about the virus.

“Behind the mind-set of ‘always blame China’ is a kind of dirty politics, championed by a few people who shift the spotlight for political gain,” said Cui. “In their manipulation, China has to be wrong.”

In his opinion piece, the ambassador insisted China has done its best to share information about the virus.

He noted that on Dec 27, a doctor in Hubei province reported three suspicious cases. In the following four days, local and central governments conducted investigations on the ground. Then, on Jan 3 — within a week — China began briefing the World Health Organization (WHO), the US and other countries about the outbreak.

On Jan 12, China released the whole genome sequence of the virus, which has proved critical for diagnosis and treatment of the disease globally.

“We shared information with the United States at the earliest possible time and have been supporting its fight against the disease,” Cui wrote.

The two countries’ centers for disease control and prevention and other government agencies have been in close communication since Jan 4, the day after China briefed the WHO. In their phone calls, President Xi Jinping gave detailed accounts of China’s measures to President Donald Trump, according to Cui.

“It is time to end the blame game. It is time to focus on the disease and rebuild trust between our two countries,” he wrote.

“Many others share my belief that the world’s leading countries need to cooperate multilaterally to mitigate and ultimately prevent the spread of the virus,” Paal told China Daily.

“The temptation to put one’s own people first is understandable, but viruses don’t respect borders,” he said.

“Instead of blaming each other, the most important thing is for the two sides to work together firstly on the medical and public health fronts, and so all the other issues should be secondary,” Li said.

“There’s no reason that the United States and China should not cooperate at this critical moment,” he said.