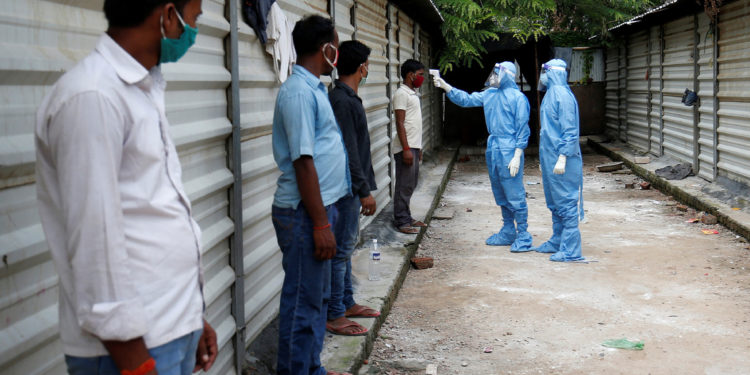 The ministry said 1,043 deaths were recorded over the latest 24-hour period across the country. Asia’s worst-hit country has been posting the world’s largest daily caseload every day for almost a month, although deaths remain relatively low, with its total death toll of 67,376.

According to the Indian Council of Medical Research, 45,509,380 people had been tested by Wednesday, with 1,172,179 of these conducted on Wednesday alone.

The rise in new cases is attributed to the government’s efforts to ramp up samples testing. Wednesday marked the fifth day that more than 1 million tests had been carried out.

India on Tuesday entered the fourth phase of unlock stage of measures taken in response to the coronavirus. Guidelines to apply during this stage were issued on Saturday. Schools will remain shut through September.

Metro rail services will resume from Sept 7 in a graded manner, and public events with up to 100 people will be allowed from Sept 21.

The number of global COVID-19 deaths reached 863,577 on Thursday, according to the Center for Systems Science and Engineering at Johns Hopkins University in the United States. Infections that day stood at 26,056,777, the center’s data showed.

South Korea vowed on Thursday to double its critical-care hospital beds amid a severe shortage, highlighting the strain of the pandemic on even well-equipped countries.

The spike in serious cases－with older people making up an increasing proportion of patients amid a broader resurgence－marks a sharp turn for a country that was seen as successful in crushing one of the worst early outbreaks of the virus.

Fewer than 10 intensive-care beds were available in the greater Seoul area, a metropolis of 26 million people, as of Tuesday, health authorities said.

The health ministry said it will spend 100 billion won ($84 million) to acquire 500 beds for severely ill patients nationwide by the middle of next year, aiming to secure at least 110 by the end of the month.

“We are also exerting our full efforts to enable stable treatment for the patients,” the ministry’s director-general for public health policy, Yoon Tae-ho, told a news briefing.

As of Thursday, 154 COVID-19 patients were in a serious or critical condition in South Korea, up from 123 the day before.

Britain is putting 500 million pounds ($666 million) into trials of rapid tests and into population-testing for the disease, the health ministry said on Thursday.

Health Minister Matt Hancock said he hopes mass testing, using kits with faster results, can be rolled out toward the end of the year. Mass screening is the key to restoring freedoms after months of restrictions, he said.

The funding will be used to expand existing trials of saliva tests and for a rapid 20-minute test in southern England, while a new, community trial in Salford, northwest England, will assess the benefit of population-testing. This entails the regular testing of people regardless of whether they have symptoms, so that any cases can be picked up before they have spread widely.

“Innovative new tests that are fast, accurate and easier to use will maximize the impact and scale of testing, helping us to get back to a more normal way of life,” Hancock said.