First hearing in Israeli Prime Minister Benjamin Netanyahu's corruption trial was concluded on Sunday afternoon, with defense lawyers asking for a six-month delay in the proceedings 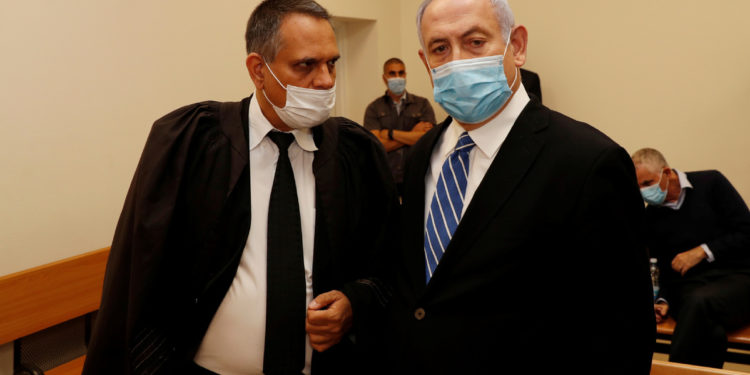 Live broadcast on all Israel’s main TV channels showed Netanyahu entering the small courtroom, surrounded by his bodyguards. He did not sit down before making sure all the photographers left the room to avoid a picture of him sitting at the defendants’ bench.

At the start of the hour-long session at the Jerusalem District Court, Netanyahu was required to confirm that he had read and understood his indictment.

Netanyahu’s lawyers then asked to delay the discussions for at least six months, saying they need to go through “300 folders” of evidence and require additional time to prepare for the trial. The prosecution objected, saying the defense team had more than a year to read the materials and prepare.

The judges are expected to publish their decision by Tuesday.

Upon arriving at the court, Netanyahu launched an all-out attack against the justice system, charging the trial is a conspiracy by media, police, prosecution, and the left-wing to oust him.

With his right-wing Likud party ministers standing around him, wearing masks, Netanyahu accused the justice system of carrying out “an attempt to eliminate the will of the people” and an “attempt to depose a strong right-wing leader.”

Hundreds have rallied outside the court, protesting in support of Netanyahu and against him.

The opening of the trial marks the first time in Israel’s history that a sitting prime minister is facing criminal trial.

Netanyahu appeared at the hearing after the three-judge panel rejected last week his request to skip the opening hearing.

The unprecedented trial started a week after Israel’s longest-serving leader had been sworn-in for a fifth term.

Netanyahu is indicted with bribery, fraud and breach of trust in three separate cases. In an affair dubbed by the police, “Case 4000,” Netanyahu allegedly took bribes from Shaul Elovitch, a former control-holder of Bezeq, Israel’s largest telecom company, by giving Bezeq financial and regulatory benefits.

During the alleged offenses, Netanyahu was the communication minister in addition to his capacity as prime minister.

In exchange, Elovitch, a close friend of Netanyahu, allegedly required Walla, a news site controlled by Elovitch, to provide favorable coverage of the Netanyahu and his wife Sara.

In “Case 1000,” Netanyahu and his family allegedly received expensive cigars, champagne, and jewelry worth about 1 million new shekels (268,200 U.S. dollars) from the Israeli businessman and Hollywood tycoon, Arnon Milchan, between 2007 and 2016.

In “Case 2000,” Netanyahu and Arnon Mozes, the publisher of Yedioth Ahronoth, one of Israel’s largest newspapers, allegedly held talks over an exchange deal, in which Netanyahu would receive favorable coverage in Yedioth Ahronoth.