Beijing warns on use of ‘China card’ in US vote

Beijing opposes the efforts of some individuals in the United States to drag China into the US elections and play the China card to gain votes, Foreign Ministry spokesman Geng Shuang said on Monday. 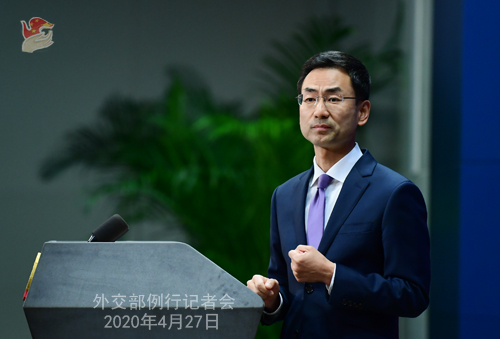 Geng made the remark at a news conference after a recently disclosed memo advised US Republican candidates to address the coronavirus crisis by attacking China.

The 57-page memo stresses three main lines of assault: That China caused the virus “by covering it up”, that Democrats are “soft on China”, and that Republicans will “push for sanctions on China for its role in spreading this pandemic”, the Politico reported.

The memo shows that Republicans are also eager to make China an issue in down-ballot races, it said.

The report shows clearly why some political forces in the US make every attempt to use the pandemic to smear and attack China, Geng said, adding that China firmly opposes such moves as well as their attempts to harm China’s interests.

The US repeatedly claims that China spreads disinformation, he said, adding that “if the report is true, I have to wonder who on earth is spreading false information?”

Apart from the memo, there are increasing doubts in US society over Washington’s handling of the COVID-19 pandemic.

US media, think tanks and experts have raised doubts on whether the government has hidden something and why it is hurriedly shifting blame to others.

“We hope the US government will respond in a timely way to concerns from US people and the international community,” he said.

Noting that Chinese and US people are victims of the pandemic, he said that only through solidarity and collaboration can the international community triumph over the disease.

China hopes the US will take effective measures to safeguard the security and health of its nationals in an open, transparent and responsible way, he said.

He added that China also hopes the US will work with the international community in jointly maintaining global public health security.