The dual-circulation development paradigm refers to taking domestic development as the mainstay, with domestic and international development reinforcing each other. 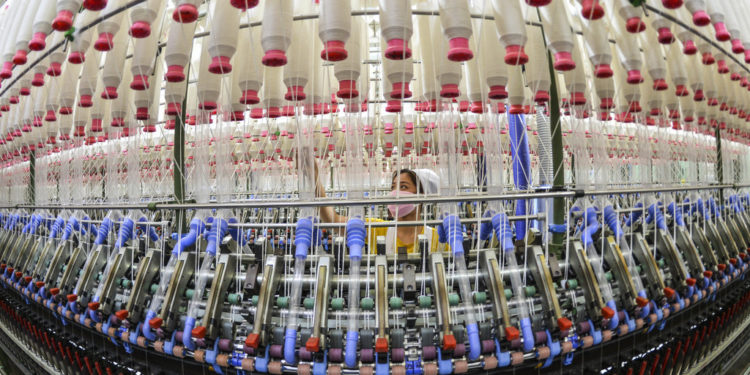 China is seeking a new position in the global economy, aiming to simultaneously become a “world market” and a “world factory”, which will consolidate its key role in the global market, with deeper integration into global society, according to top-level policy advisers.

That is a blueprint not only for guiding this year’s economic work, but also setting a basic principle for China’s 14th Five-Year Plan (2021-25), indicating policymakers’ determination to further open the domestic market.

Legislators and political advisers will gather in Beijing this week to discuss the key issues of China’s development at the annual sessions of the National People’s Congress and the National Committee of the Chinese People’s Political Consultative Conference.

To achieve the goal, China will stabilize imports and expand exports, continually promote cross-border trade and investment and optimize the business environment under the “competitive neutrality “principle, which treats all types of market entities equally, said Yang Weimin, deputy director of the Economic Affairs Committee of the 13th CPPCC National Committee.

“China will not separate from the rest of the world,” Yang said, as the theme of the 14th Five-Year Plan (2021-25) and the Long-Range Objectives Through the Year 2035 is to promote the internal and external markets, also known as the dual-circulation development paradigm. It requires boosting domestic consumption and facilitating China’s performance in the world’s development.

The dual-circulation development paradigm refers to taking domestic development as the mainstay, with domestic and international development reinforcing each other.

“When we talk about the dual-circulation growth pattern, we are not only talking about the internal part,” said Yu Miaojie, deputy dean of Peking University’s National School of Development.

“China’s economy is growing. It now accounts for about 18 percent of the world’s economy, but we still need to be aware of the importance of the remaining 82 percent. Chinese enterprises need to connect their businesses with the global market, so the internal and external markets are complementary and integrated.”

Proposals for the 14th Five-Year Plan (2021-25) and the Long-Range Objectives Through the Year 2035 will be reviewed at the two sessions.

The plan and objectives were raised by the top leadership in October at the Fifth Plenary Session of the 19th Central Committee of the Communist Party of China. A major goal is to increase per capita GDP to the level of medium-developed countries by 2035.

Research led by Yang concluded that in the next 15 years, annual GDP growth should reach at least 4.73 percent on average and that given the current circumstances, only by forming a new development paradigm can China maintain sustainable growth and realize this goal. The findings were reported by the China Wealth Management 50 Forum think tank.

Liu Shijin, deputy director of the Economic Affairs Committee of the CPPCC National Committee, suggested that establishing a new system of key economic gauges, in which the employment index should be at the center, as the final target of stabilizing the economy, would guarantee sufficient employment.

“We may adopt other indicators, including the per capita income, inflation, the macro-leverage ratio and total factor productivity. In particular, carbon emissions per unit of GDP is also important,” said Liu.

“But setting a GDP (growth rate) target is still necessary. Last year, China adopted expansionary monetary and fiscal policies. But as the economy is gradually recovering, the macroeconomic policies will get back to a normal stance, and the policy shift should be smooth and moderate,” Liu added.

Zhu Guangyao, a former vice-minister of finance, projected that China will join the group of high-income countries if it maintains an average annual GDP growth rate in excess of 5 percent, meaning that it will emerge from the so-called “middle-income trap”.

“China’s economic development is bound to promote the improvement of people’s living standards and make our contribution to the development of the global economy,” he said at a seminar held by China.com.cn.

For the coming five years, China’s deeper integration into global society is very important for the world’s peace and development, with the priority of achieving healthier and sustainable domestic growth, according to Zhu. “Sober observation” is needed at the moment to understand the global development trend.

A general consensus among the policymakers is that peaceful development is still the theme, with China facing both challenges and opportunities from the external environment, he said.

During this process, there is no doubt that China will closely integrate with the world, along with dealing with the challenges of the complex external environment, including Sino-US relations and relations with other developed countries. China will also unite more closely with developing countries, to make contributions to world peace, Zhu told China Daily.

Bai Ming, deputy director of the Ministry of Commerce’s International Market Research Institute, said that in 2020 the government had taken a well-calibrated approach in terms of aiding small and private businesses and the domestic market soon regained its vitality. This achievement not only benefited China’s own growth, but also notably helped to stabilize international production and supply chains when the virus later rampaged globally.

He said that China had made tremendous efforts in promoting globalization and opening-up last year, including signing the Regional Comprehensive Economic Partnership agreement, completing negotiations on the EU-China Comprehensive Agreement on Investment, releasing a master plan for the Hainan Free Trade Port and shortening the negative list for the Access of Foreign Investment.

Since the 19th National Congress of the Communist Party of China in 2017, China has entered a new stage of opening-up. Although the anti-globalization trend is rising in the world, China consistently and firmly supports globalization through its own practices and actions, said Yu from Peking University.

The tasks China faces in the coming years include better integrating cross-border trade with industrial development, and promoting economic and trade cooperation in key regions. “Dual circulation” is a crucial new development paradigm to achieve the overall targets of high-quality opening-up, said Yu.