China currently ranks among the top investors in Rwanda which has created thousands of jobs in different sectors. 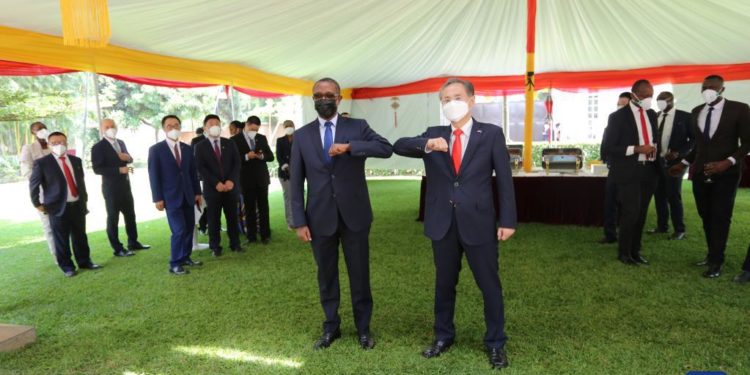 Morocco: Mohamed VI Will Not Receive Sánchez During the Bilateral Summit.

KIGALI – Rwanda and China on Monday marked the 50th anniversary of the establishment of diplomatic relations between the two countries, reflecting on the achievements as well as setting the stage to explore new areas of cooperation.

Since Nov 12, 1971, and more particularly after the 1994 Genocide against the Tutsi in Rwanda, the two countries have worked closely to strategically develop their political and socio-economic ties.

“Supported by the increasing high level political interaction and exchanges, our bonds of relationship have flourished at all levels,” Biruta said.

He reiterated his country’s appreciation for the solidarity and support of the Chinese following the recent donation to Rwanda 500,000 doses of Sinopharm COVID-19 vaccines.

In addition to traditional cooperation areas, the two countries enjoy cooperation in e-commerce, trade in high-quality agricultural produce, as well as combating the COVID-19 pandemic.

Rwanda became the first African country to export dried chili to China. Some 50,000 tons of dried chili will be exported to China in the next 5 years.

Chinese Ambassador to Rwanda, Rao Hongwei said over the years the two countries have developed high-level political mutual trust, “making bilateral relations as stable as a great rock in the face of any changes in the international situation.”

“Our economic and trade cooperation has gotten closer. China is proud to be Rwanda’s largest trading partner and largest project contractor,” he said.

The bilateral trade volume between the two countries in 2020 reached 321 million U.S. dollars despite the impact of COVID-19.

Since 1982, China has dispatched 21 medical teams to Rwanda, with a total of 258 doctors providing medical services to more than 700,000 local people, according to data from the embassy.

Over 5,000 students were enrolled by the Confucius Institute at the University of Rwanda while more than 2,000 members registered with the Rwanda Kung-Fu Wushu Federation.

Hundreds of Rwandan students receive Chinese scholarships to study in China every year while more and more Chinese have been learning about Rwanda and visiting for sightseeing and business.

Noting that people-to-people exchanges have expanded, the envoy noted that the two countries support each other in international affairs and speak in one voice on many issues such as development and human rights.

According to the ambassador, the friendship between China and Rwanda is not an accidental choice, but the result of like-mindedness.

“We both maintain that all countries, big or small, strong or weak, are equal. We both cherish national sovereignty and independence, and resolutely oppose any interference in our internal affairs by any country or external forces,” he said.

“China will join hands with Rwanda to build a community with a shared future for the two countries, and for China and Africa at large,” he said.