If lawmakers back the latest government plan, Austria will become the first nation in the EU to make vaccination against Covid-19 obligatory. 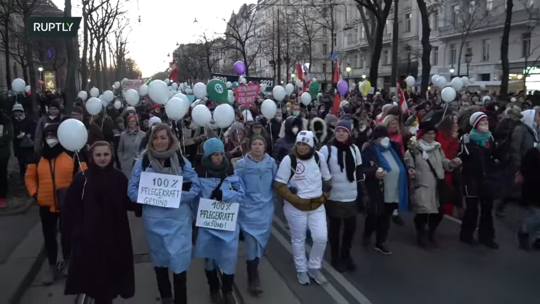 Thousands of Austrians took to the streets of Vienna to protest against an upcoming parliamentary vote to make Covid-19 vaccines mandatory, with demonstrators calling for the government to be replaced.

Protesters carried Austrian flags through the streets on Saturday as police in riot gear could be seen standing in a line nearby. “Face your guilt and turn back!” one banner read, while others accused Austria’s right-wing ruling party – the Austrian People’s Party (OVP) – of splitting the nation with its coronavirus policies.

In November, the Austrian government signaled its intentions to make vaccination against Covid-19 mandatory, and parliament is scheduled to vote on the issue next week. If the mandatory vaccination plans are passed, Austrians could face repeated fines of thousands of euro for remaining unvaccinated.

Austria has implemented some of the strictest Covid-19 response measures in the world – which equally have been met with some of the largest protests. Measures have included lockdowns only for the unvaccinated and a ban on those who have yet to receive the vaccine from entering restaurants and stores.