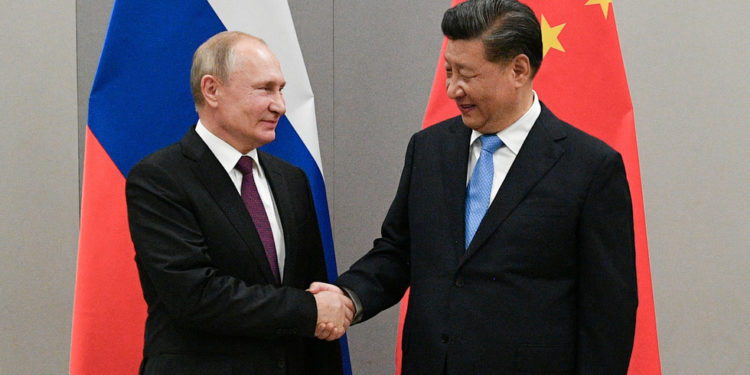 By Paul Robinson, a professor at the University of Ottawa. He writes about Russian and Soviet history, military history, and military ethics, and is author of the Irrussianality blog http://t.me/irrussian

Strategy is all about achieving an outcome. The mark of a good strategy is that it knows what it wants to achieve, and works towards doing it. That’s why the first principle of warfare is about “selecting and maintaining the aim.”

This is, of course, pretty obvious, but it’s remarkable how little attention people pay to it. Pundits provide policy options, but all too often fail to mention the ultimate objective or how the options in question help arrive there. The result is often proposals that are at best pointless, and at worst completely counterproductive.

All of which means it’s good when somebody comes straight out and tells you what the point is. For this reason, we should probably be grateful for the most recent rant by journalist Ed Lucas, a one-time senior editor of The Economist who now peddles his wares as a ‘Senior Vice President’ of the Center for European Policy Analysis (CEPA). This outfit, funded by NATO and various American arms contractors, follows a consistently anti-Russian line, in line with the policy and business objectives of its sponsors.

In an article entitled ‘In Search of Victory’, Lucas lays out his vision of what a victorious end to the New Cold War would look like. In Lucas’ eyes, the United States is locked in an existential geopolitical struggle with Russia and China. In this two-front war, if the West puts too many resources into fighting the one, the other will take advantage and strike. As Lucas says, “the more that China consumes Western decision-makers’ attention, the less time they have to counter the Kremlin.”

According to him, “resources are finite too. If the United States pulls the US Marine Corps out of Norway because it is needed in the Pacific, all northern Europe feels the pinch. Nobody is safe against Russia if the West fails to deal with China.” It’s worth noting that the US losing interest in confronting Russia in the European theatre would literally be an existential crisis for CEPA. In such an event, its funding would almost certainly disappear. Indeed, the same goes for pretty much all of those employed in the trans-Atlantic ‘Russia scare’ industry.

The idea that the path to defeating Russia lies through China is more than a little odd. And one has to wonder what Lucas thinks is going to happen if there aren’t any US Marines in Norway – are the Russians suddenly going to invade? But the point is clear nonetheless: Russia and China are two sides of the same coin and the West should be afraid.

Part of the problem, says Lucas, is that the West doesn’t have a clear idea of how it would define victory in this struggle. So Lucas makes a stab at it. As far as Russia is concerned, “maybe it breaks up. Maybe it turns inward. Maybe it becomes too poor to pose a threat. Maybe it becomes democratic.”

As for China, he adds, “my heart yearns for a Soviet-style collapse, involving the toppling of the Chinese Communist Party and independence for Tibet and East Turkestan… But Xi Jinping’s leadership bears no comparison with the Soviet Union in its dotage. And regime change in China typically involves tens of millions of dead. Would we avoid that? … Do we really want this huge country to concentrate on getting richer quicker?”

Because, God forbid that a billion-plus people should see their living standards improve. We can’t allow that,can we?

Victory in this game is measured in terms of the impoverishment of the Russian and Chinese people; the dismemberment of their states; and as a by-product, potential mass death. This was indeed the case in Russia following the collapse of the USSR; and possibly “tens of millions” to come in China, as Lucas says. Victory, indeed!There’s a curious inconsistency in all this. Lucas, like so many in the Western policy community, likes to talk about democracy and liberal values, which theoretically are centred on the wellbeing of the individual. But when it comes to the real-life individuals in countries like Russia and China, they’re just pawns in a geopolitical game.

The problem with this attitude is that it is ultimately self-defeating. A failed China would not be in the interests of Western states, which benefit from their huge trade with the People’s Republic and would not enjoy the instability that would follow its disintegration. The same could be said of Russia – the price of the Soviet Union’s collapse is still being paid in war and instability in Russia’s near abroad.

To be fair to Lucas, he says that most of the options for Russia’s defeat would be “tragic” and only one – supposed democratization – is “pleasant.” But even this reveals a failure of strategic thinking. If the aim of Western foreign policy is to reduce the threat from foreign powers, there’s no reason to think that democratization is a solution, especially given that Moscow is run in a way that huge sections of the country’s population agree with.

Russia and China have national interests that will persist even if they meet Western standards of liberal democracy, and these interests will continue to clash with those of the West regardless. Moreover, rather than being more pro-Western, a democratic Russia is likely to be the opposite. By the standards of most of his compatriots, Russian President Vladimir Putin is something of a moderate on foreign policy. Apart from a tiny minority of liberal activists, almost nobody in his country criticizes him for being too assertive on the international stage. Such criticism as exists is almost entirely that he is not assertive enough and should take a more belligerent line.

In other words, were Russia more democratic, it wouldn’t be any less of a problem for the West.

The same is probably true for China. A democratic China is still going to claim the South China Sea, is still going to want to expand its naval power to protect its trade routes, and is still going to seek to spread its influence in Asia, Africa, Latin America, and elsewhere. In other words, it will still challenge America’s position as the number one nation of the world.

Lucas’ views are extreme even by the standards of the Western foreign policy community, but his faith in the spread of democracy as the solution is right in the middle of the mainstream. So too is his general approach, which views success in terms of defeating geopolitical rivals and preserving American hegemony. But to make sense, strategic goals must be achievable. This one isn’t. Trying to stop Russia and China is like King Canute trying to hold back the tide. It’s futile.

A sensible strategy for the West would be to focus on managing its relative decline, not preserving a hegemony that cannot be preserved. However, few talking heads in lucrative think tank jobs seem to be asking how to do this.