That’s what would happen if Ukraine joins NATO, the Russian president has said 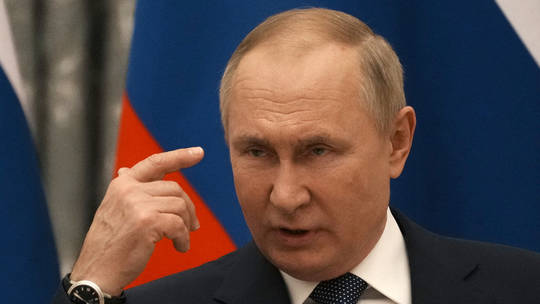 Russian President Vladimir Putin told reporters on Monday that Ukraine’s entry into the North Atlantic Treaty Organization and a follow-up attempt to retake Crimea would potentially cause a war between Russia and France, as he spoke at a press conference alongside French President Emmanuel Macron.

Putin explained in no uncertain terms what Ukraine being accepted into NATO could lead to as he responded to a question by a French journalist.

“You want France to fight Russia? That’s exactly what would happen” if Ukraine joins NATO and tries to implement its state policy of ‘reintegrating’ Crimea by force, Putin told reporters.

Kiev has designated Russia as an adversary and insists Crimea belongs to Ukraine, the Russian president explained. After the 2014 coup in Kiev, the peninsula voted to rejoin Russia, something most NATO countries have not recognized.

An attack by Ukraine on Crimea would trigger Article 5 of NATO’s founding treaty, pulling all of Europe into a war with Russia, Putin explained.

“Russia is one of the world’s leading atomic powers. There would be no victors,” Putin told reporters. “[Macron] does not desire such an outcome. Neither do I.”

The Russian president pointed out that Kiev has already used force to resolve the crisis in Donbass – the two eastern regions of Donetsk and Lugansk – twice already.

“Where are our guarantees that they won’t try again?” he asked.

Macron visited Moscow on Monday to discuss the situation in Ukraine, broader questions of European security, as well as bilateral relations with Russia. He is due in Kiev on Tuesday, for talks with Ukrainian President Volodymyr Zelensky.