The white police officer who shot Jacob Blake, a 29-year-old black man, in the back, triggering a new wave of violent protests in the United States, has been named by US officials. 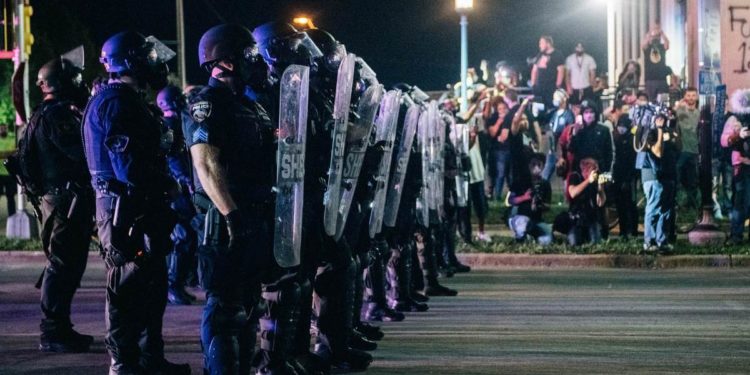 Anger and grief have built since Sunday, when Rusten Sheskey, a seven-year veteran of the police force in Kenosha, Wisconsin, shot Blake seven times at point-blank range while three of Blake’s children watched.

The US Department of Justice announced on Wednesday that it was opening a civil rights investigation into Blake’s shooting.

But on Wednesday the Wisconsin Department of Justice gave its first official account of Blake’s shooting, saying he had a knife “in his possession” when officer Sheskey fired his gun into his back.

It was not clear from the statement if the knife, recovered from inside the car, was in Blake’s hands when he was shot or at any other point during the altercation. He survived, but may be paralyzed for life.

Videos showed one of the vigilantes shooting at protesters with an assault rifle. The man then walks down the street freely, gun slung across his chest, while protesters scatter and police vehicles drive past him. A white 17-year-old has since been arrested for murder.

Kyle Rittenhouse, of Antioch, Illinois, about 25 kilometers from Kenosha, was taken into custody in Illinois on suspicion of first-degree intentional homicide in the attack on Tuesday that was largely captured on cellphone video. The shooting left a third person wounded.

“I just killed somebody,” the gunman, carrying a semi-automatic rifle, could be heard saying at one point.

Blake’s shooting came just three months after another African-American man, George Floyd, suffocated beneath the knee of a white officer in Minneapolis, igniting the most widespread civil unrest in the country in decades.

Chinese Foreign Ministry spokesman Zhao Lijian said on Thursday that these kinds of incidents had happened again and again in the United States and had attracted the attention of the international community.

“We hope that the US will listen to the voices of ethnic minorities demanding equality and justice, and the concerns of the international community on the human rights situation in the country, and face up to and properly deal with the serious problems of racial discrimination there,” he said.

In the wake of the latest killings, Wisconsin Governor Tony Evers authorized the deployment of 500 members of the National Guard to Kenosha, doubling the number of troops in the city of 100,000, midway between Milwaukee and Chicago. His office said the governor is working with other states to bring in additional National Guard members and law officers. Authorities also announced a 7 pm curfew, though protesters ignored it again on Wednesday.

Protesters marched past the intersection where two people were shot on Tuesday night, stopping to gather around the spot where one person was shot, and to pray and lay flowers. Daijon Spann said he decided to join the demonstration because one of those killed the night before was a friend.

“I couldn’t take it any more,” he said. “I couldn’t just sit there and watch my friend die.”

Evers, a Democrat, said in a statement:”A senseless tragedy like this cannot happen again.”

Meanwhile, Rittenhouse was assigned a public defender in Illinois for a hearing on Friday on his transfer to Wisconsin. Under Wisconsin law, anyone 17 or older is treated as an adult in the criminal justice system.

Much of Rittenhouse’s Facebook page is devoted to praising law enforcement, with references to “Blue Lives Matter”, a movement that supports police. He also can be seen holding an assault rifle.

Meanwhile, Minnesota Governor Tim Walz declared a state of peacetime emergency in Minneapolis after violent protests erupted on Wednesday night following the death of a black homicide suspect who police say shot himself. Minneapolis police posted a surveillance video of the incident on Twitter, saying the victim, a suspect in a homicide, committed suicide and that no weapons were fired by police.