Nigeria’s centre for disease control on Tuesday confirmed two new cases of the coronavirus in the country, bringing the total number to 44. 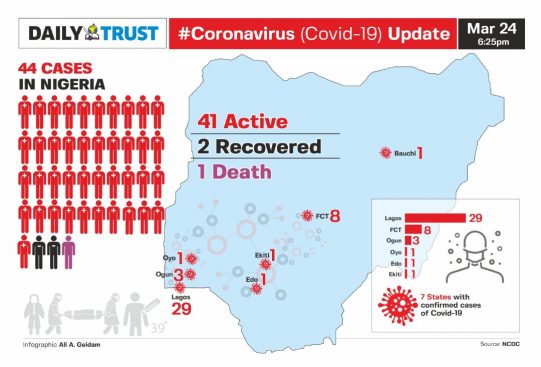 The two cases were located in Abuja and Bauchi State.

“The cases have travel history to Germany and the UK.”

The two new cases are likely to be those of Abba Kyari, President Muhammadu Buhari’s chief of staff, and Bauchi state Governor Bala Muhammed.

The two were earlier on Tuesday reported to have tested positive for the virus. The duo have recently visited Germany – Germany is a high-risk country that has recorded nearly 30,000 cases of coronavirus.

Multiple media reports Tuesday said that Kyari tested positive several days after returning from an official trip to Germany. Kyari, a close ally to President Muhammadu Buhari, was in Germany in early March with a delegation of other Nigerian officials for meetings with Siemens AG.

Kyari, who is in his 70s, has a history of medical complications, including diabetes, Reuters reported.

There are strong possibilities that he has met with the president after he returned from Germany. Multiple media reports said the president was also tested for the virus but his test came back negative.

Before his diagnosis, Kyari met with Kogi State Governor Yahaya Bello when he represented Buhari at the Fidau prayer for the governor’s late mother on March 17.

It is unclear if Bala visited the UK recently but on March 13, the governor signed a Memorandum of Understanding (MOU) with Water is Right Foundation, led by its founder, Rolf Stahlhofen in Germany.

After his return from Germany, the governor led a high-level delegation from Bauchi State to the office of the NCDC, led by its director general, Chikwe Ihekweazu.

The meeting was to discuss Bauchi’s preparedness and response to Lassa fever and other infectious diseases.

However, before the governor took the test after it was announced that Mohammed Abubakar, son of former vice president, Atiku Abubakar, had tested positive for the virus on Sunday, March 22. The governor had met Abubakar inside an Abuja-bound airplane in Lagos and shook his hand on March 17.

A day after the meeting from which the governor is now believed to have contracted coronavirus, he met with Nigerian billionaire, Alike Dangote.

He also attended the National Economic Council meeting on March 19. The meeting regularly takes place at the Presidential Villa and comprises all 36 state governors, the governor of the Central Bank of Nigeria and other top government officials.

It is uncertain if they both adhere to the directive of the NCDC to self-isolate themselves for 14 days to watch for possible symptoms and avoid infecting others unknowingly.

Two of the 44 cases in Nigeria have recovered and been discharged, while the nation’s first coronavirus death was announced on Monday, March 23.