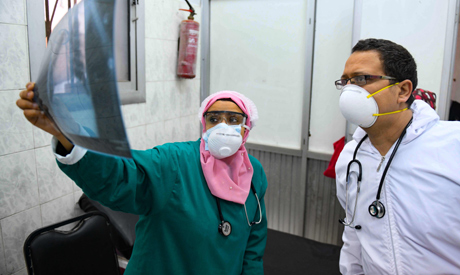 Around 40 percent of the staff at Cairo’s Al-Zahraa University Hospital have tested positive for coronavirus, an official has said.

Thirty-eight staff members tested positive for COVID-19 out of a total 101 people who underwent tests at the facility, Mahmoud Siddiq, vice president of Al-Azhar University, to which the hospital belongs, said on Saturday

Fourteen cases were confirmed at the hospital late last week and 24 others were detected on Saturday, Siddiq said in comments to Sada El-Balad satellite TV channel.

The newly-detected cases include eight kitchen workers, an administrative staff member, and the rest are medical staff: doctors, nurses and other medical workers, according to Siddiq.

The new cases were due to be transferred to an isolation hospital in Cairo’s northeastern Nasr City district on Sunday morning.

The hospital is planning to conduct 100 tests on Sunday for those who came in contact with the infected staff members, he said.

The hospital’s dialysis and intensive care patients have been transferred to other hospitals affiliated with Al-Azhar, Seddiq said, adding that the hospital may close for 14 days.

Egypt’s health ministry has not provided a tally of doctors who have been infected or died from the flu-like virus. The Doctors Syndicate, however, has said that nine physicians have died as of Friday, and the latest tally of infections among medical staff it provided in late April was 90.

A health ministry spokesman said last week that only 12 percent of infected medical staff members contracted the virus while on duty at hospitals, while the rest got infected outside medical facilities.

A set of financial incentives has been adopted recently for Egyptian medical staff as part of the government’s efforts to support members of the healthcare sector amid the coronavirus crisis.