China lashed out at Japan and the United States on Saturday as the two allies pointed fingers at Beijing's domestic issues and core interests and went overboard in interfering in its affairs. 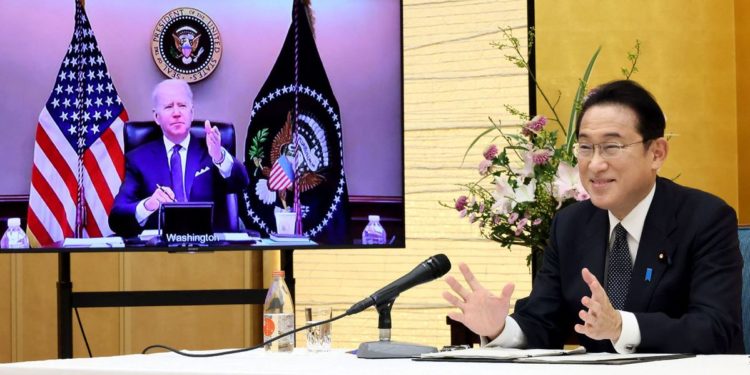 “The video meeting between the leaders of Japan and the United States maliciously manipulated China-related issues, made groundless attacks on China, grossly interfered in China’s internal affairs and seriously violated international law and basic norms governing international relations,” the Chinese embassy in Japan said in a statement. It added, “We express our strong dissatisfaction and firm opposition to this, and have lodged stern representations.”

The statement came one day after US President Joe Biden and Japanese Prime Minister Fumio Kishida had their first substantial talks since Kishida became prime minister in October.

China and China-related issues inevitably dominated their 80-minute conversation, during which they agreed to boost cooperation on pressing economic and security issues, including China’s growing might, Democratic People’s Republic of Korea’s missiles and Russia’s intentions in Ukraine.

After the talks, Kishida told reporters: “We (he and Biden) agreed to work together to advance cooperation among like-minded countries to realize a free and open Indo-Pacific,” a diplomatic strategy frequently used to counter China’s efforts to build “a community with a shared future for mankind” with countries directly involved in the region.

“We agreed to closely cooperate on China-related issues, including the East and South China Seas, Hong Kong and the Xinjiang Uygur (autonomous region), and North Korea’s nuclear and missile issues,” Kishida added.

During the meeting, Biden reaffirmed that the US defense commitment extends to China’s Diaoyu Islands in the East China Sea, while a White House statement said the two countries were “resolved to push back” against China’s attempts to change the status quo in the East China and South China seas.

In response, the Chinese mission in Tokyo said the Japan-US alliance is a “product of the Cold War” and the bilateral ties “should not target or harm the interests of third parties, nor should it talk about China everywhere.”

“Japan and the US hold a Cold War mentality, engage in bloc politics, provoke bloc confrontation, and create division, which will only harm others and themselves,” the statement said. “The international community can see clearly who is engaging in hegemonic interference in the name of rules and who is wielding the stick of sanctions to bully and coerce others,” it added.

“We urge Japan and the US to follow the trend of the times, abandon the narrow-minded policy of a zero-sum game, stop interfering in China’s internal affairs and stop using ideology as a tool to build a political bloc.”

Regarding the China-Japan relationship, the statement said Japan’s recent moves, such as “hyping up China-related issues” and “making irresponsible remarks about China’s internal affairs”, had violated the spirit of the four political documents between China and Japan and had damaged the mutual political trust.

“China solemnly urges the Japanese side to correct its wrong words and deeds, stop provoking moves and avoid further damage to bilateral relations,” the statement said.

Zhong Feiteng, head of the Department of Great Power Relations Studies of the National Institute of International Strategy at the Chinese Academy of Social Sciences, said the current US-led alliance system is out of date and Japan needs to work harder in the future to strike a balance between China and the US.

“Think about global challenges like COVID-19 and climate change, which were also discussed by Biden and Kishida on Friday. How is it possible that Japan and the US could solve these problems by themselves instead of working together with China and other countries?” Zhong said.