Once on the ground, as confirmed by some of the passengers who were on board, it was indeed a problem with the landing gear of the aircraft. 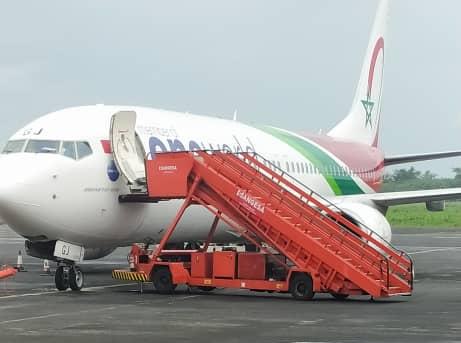 Today, September 24, the pilots of the Air Maroc airline company on flight AT262 to Casablanca announced their return to the Malabo airport, a few minutes after takeoff which will later be attributed to a forced landing, caused by a technical issue.

Once on the ground, as confirmed by some of the passengers who were on board, it was indeed a problem with the landing gear of the aircraft.

The company’s Boeing 737-800 was landing a few minutes to 8:30AM local time in Malabo, the capital city of Equatorial Guinea.

“It has been the longest 10 minutes of our lives,” agreed three passengers in the description of the moment of silence experienced by the passengers on board since they were informed by the crew, about the “technical landing”.

The passengers were ushered into the departure lounge after nearly three hours on board. For now, the company has chosen to accommodate them at the Bisila Palace Hotel, pending news of their new itinerary and the subsequent logistics, since most passengers used the return as a stopover to their final destinations.