Ambassador Mohamed Ameur organized the reception to honor 15-year-old Dassy, who began his first year at the Free University of Brussels (ULB) this week. 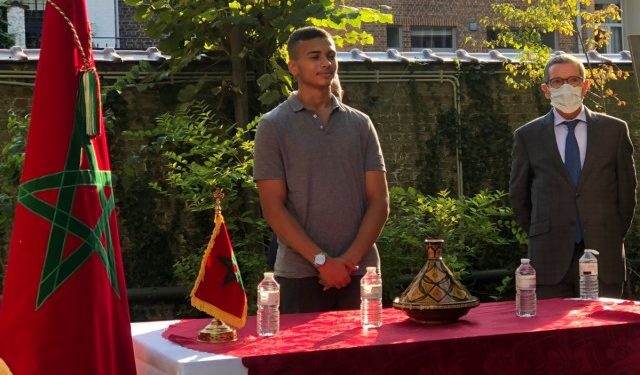 He is the youngest student at the Solvay Brussels School of Economics & Management at ULB, where he studies engineering.

Ameur described the boy as “a source of pride” for his family, his secondary school, the Moroccan diaspora, Belgium, and for the “Motherland, Morocco,” according to Morocco’s state media.

“Your achievement is not only a source of joy and a source of pride but also further proof of the successful integration of the children of the Moroccan community in Belgium,” the ambassador beamed.

“Young Moroccans in Belgium feel great pride and need models of success and outstanding references to move forward in their various paths,” Ameur emphasized. “Morocco is proud to see its son shine through the world.”

Salah Eddine Dassy thanked the ambassador for his support and expressed his readiness to continue to demonstrate a positive image of the Moroccan diaspora.

Morocco’s Consul General in Brussels Abderahmane Fayad and the national education coordinator at the Moroccan embassy, Youssef Riani, attended the reception. Dassy’s high school tutor and prefect, ​​Abed Mellouli, was also present, along with members of the association of Moroccan students in Belgium.

At the end of the ceremony, the Moroccan ambassador presented Dassy with a “gift of encouragement.”

Salah Eddine Dassy is evidence of Ameur’s confidence in the Moroccan community to provide opportunities for both Morocco and Belgium.

In an interview with Belgian news outlet Le Vif L’Express earlier this month, the ambassador said the Moroccan diaspora contributes in a “remarkable way to the modernization of Morocco. This is the reason why the policy towards the diaspora must accompany and promote integration.”

A more recent study from Brussels Jet Pack Center for Analysis reported in April 2019 that Moroccans accounted for 9% of the foreign population in Brussels, home to some 1.2 million people. The report puts the Moroccan population in Belgium’s capital at approximately 108,000.