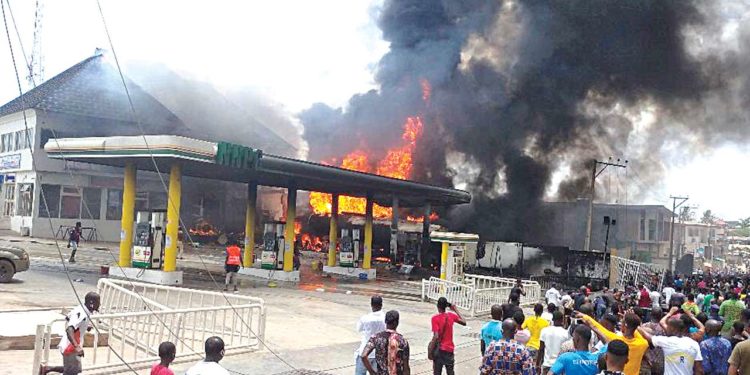 It was gathered that the fire, which started around 1pm, emanated from a diesel-laden tanker that was about to discharge its content into the station’s underground storage facility.

Apart from the filling station, over 30 vehicles in a car mart were also consumed by the fire as well as some buildings in the area.

It was gathered that the personnel of the Lagos Neighbourhood Safety Corps, the state police command and the Nigeria Security and Civil Defence Corps were on the ground to manage the crowd.

The station manager, Samuel Akinyemi, said the tanker had not commenced discharging its content when the fire ignited from the vehicle.

He said, “I cannot say how the fire started, because it caught us unawares, but what happened was that a diesel-laden tanker arrived and we stationed it with the expectation that business would resume tomorrow (Tuesday) and we wanted to be available to the public in anticipation that the lockdown would be relaxed by the President.

“We stationed the truck at the appropriate place for discharge, but unfortunately, a fire that I can’t even say how it came about started and before we knew it, it had escalated. The fire started from the truck but nobody was there when it started.”

Akinyemi added that he could not estimate the damage done at the moment.