Saturn’s moon of Mimas is likely hiding an ocean under its surface where alien life could be found: scientists

Ironically, a study that was out to prove once and for all that Saturn’s innermost moon was geologically dead ended up coming to a completely opposite conclusion. 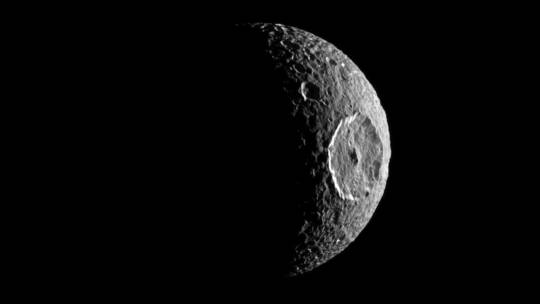 The number of places to search for life in our solar system could be expanded as scientists said they’ve discovered “compelling evidence” of a “stealth ocean world” on Saturn’s icy moon of Mimas.

So far, Saturn’s Enceladus and Jupiter’s Europa have been considered the prime candidates to host alien life. Both of those icy moons show signs of geologic activity, which suggest that they have an internal heat source that allows the existence of liquid water under the surface. And water is known as the perfect medium for life.

But Mimas – nicknamed after the ‘Death Star’ space station from the ‘Star Wars’ franchise due to a large crater on its side – hasn’t been showing any signs of such activity, being viewed by astronomers as “just a frozen block of ice.”

“Turns out, Mimas’ surface was tricking us” and there are valid grounds to suggest that the moon hosts a liquid internal ocean, Dr. Alyssa Rhoden, of the Southwest Research Institute, said in a press release on Wednesday.

The tiny wobbles or “librations” in Mimas’ rotation detected by NASA’s Cassini spacecraft can be explained by the moon’s gravitational interactions with Saturn, which produce enough heat to maintain liquefied water under the ice, according to the study published earlier this month in the Icarus journal.

Rhoden and her team developed mathematical models of tidal processes heating the moon that suggest the ice shell on Mimas could reach between 22.5 to 32 kilometers.

“Most of the time when we create these models, we have to fine tune them to produce what we observe,” she said. “This time evidence for an internal ocean just popped out of the most realistic ice shell stability scenarios and observed librations.”

“Mimas is a compelling target for continued investigation,” Rhoden insisted. Verifying its status as an ocean moon would help the astronomers to better understand Saturn’s rings and “the prevalence of potentially habitable ocean moons, particularly at Uranus,” she added.