Silvio Berlusconi has become the latest candidate to be linked with running to be the country’s next president, at the age of 85.

The election process formally begins next week, and it is not yet clear if Berlusconi will still be part of it by then, with even those closest to him admitting his candidacy may not be the best thing for the country. 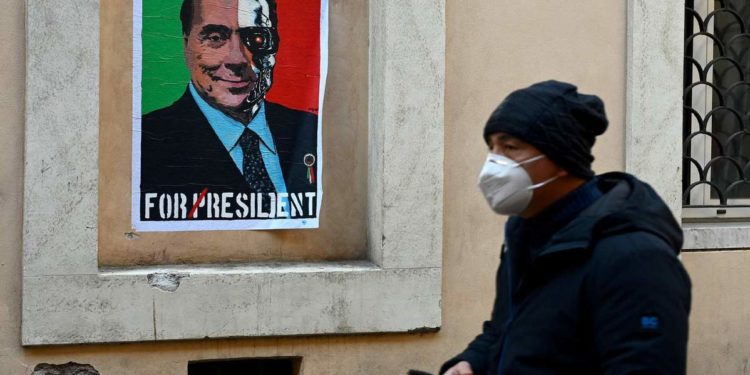 With incumbent Sergio Mattarella poised but not yet certain to step down at the end of his seven-year reign at the beginning of February, there has been widespread speculation over whether Prime Minister Mario Draghi might go for the highest job－but Berlusconi’s name is being touted as well.

The media tycoon’s four tenures of office, stretching from the mid-1990s to 2011, were marred by allegations of corruption and lurid scandals.

The Euronews website reports that in 2013, Four-time prime minister of Italy Berlusconi was convicted by Italy’s Supreme Court for tax evasion of around 7 million euros ($7.9 million) through his company, Finivest, which saw him initially jailed for four years, later switched to one year of community service, and barred from public office for six years.

There is concern that his divisive personality and politics would cause political turbulence which might threaten the recovery work from economic problems and the pandemic that Draghi has overseen.

Left-leaning Democratic Party politician Peppe Provenzano told the Financial Times that the prospect of Berlusconi as president “would pose a problem of international credibility of Italian institutions, with extremely serious consequences that would lead to a political earthquake”.

But Berlusconi’s bid may be little more than a fl ash in the pan, with one of his own supporters, lower house deputy Vittorio Sgarbi, having already abandoned his attempts to drum up support, calling it a “desperate task.”

Sgarbi told Italian state radio RAI that he thought Berlusconi was no fan of Draghi and might try to persuade Mattarella to go for another term of office, providing him with a way to make what Sgarbi called “an honorable way out”.

Berlusconi’s last stint in government was when Italy was at the deepest point of its debt crisis, and he left as the country came under pressure from ratings agencies and the European Central Bank, whose president at the time was Draghi.

Berlusconi is the formal candidate of the Parliamentary center-right bloc made up of two parties, the League and Brothers of Italy, but between them they would be unlikely to pull together enough support to propel him to success, which is why Sgarbi was recruited to try and pick up other votes, but he admitted to the Reuters news agency that this is unlikely to pay off .

“Electors should be inspired by the national interest, not the interest of one (political) camp,” said long-time friend and political associate Gianni Letta.