The Teranga Lions of Senegal will now face Burkina-Faso in the semi-final on Wednesday, February 2. 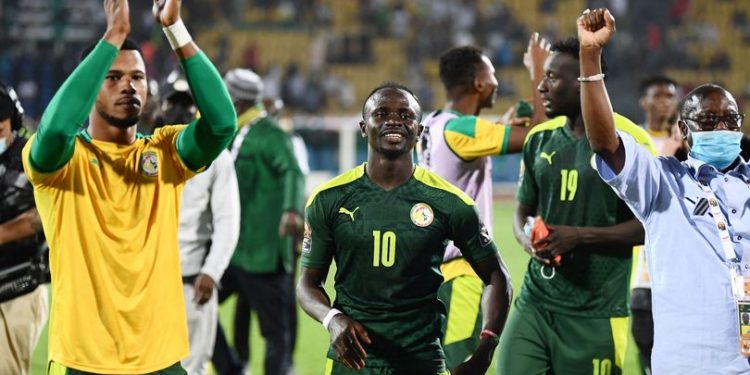 Jesus Owono, Iban Edu, Pablo Ganet, Saul Coco and the whole Equatorial Guinean team to the 2021 African Cup of Nations have etched their names in Equatorial Guinean football folklore and won hearts around the world with their displays at Africa’s biennial football fiesta but that run is over now after a 3-1 quarter final loss to the Teranga Lions of Senegal.

The Senegalese raced into the lead in the 28th minute as star man, Sadio Mane turned provider for Famara Diedhiou to open the scoring. The Senegalese dominated proceedings and were looking better, sharper and more organized than they ever have been since the start of the tournament.

President of Senegal via twitter soon after the match wrote:

“Warm congratulations dear Lions for your victory with panache against the dynamic team of Equatorial Guinea. Bravo for this qualification in the semi-final of the #CAN2021 Well done ! Dem ba diekh! Manko Indi Bi Cup

Equatorial Guinea, however, came out the better side after the break and initially thought they had won a penalty after the ball came off Kalidou Koulibaly’s hand but the centre referee, Victor Gomez, consulted with the video assistant referee and the decision was overturned, much to the surprise of the Equatoguineans.

Few minutes later, Yannick Buyla finally scored a much deserved equalizer in the 57th minute after Basilio Nchama and Pablo Ganet combined to set the midfielder up for the equalizer.

The Senegalese coaching crew responded with changes as the trio of Ismaila Sarr, Bamba Dieng and Cheikhou Kouyate entered the fray, and it was two of those substitutes that changed the tide of the game.

Taking advantage of a defensive mix-up, Cheikhou Kouyate slotted home to give Senegal a 2-1 lead in the 68th minute and Ismaila Sarr sealed the win after left back, Ciss, did some good work down the left to set up the Watford attacker in the 79th minute. Equatorial Guinea continued to press with the intention of getting back into the game but the Senegalese, who played their best game so far, held on to qualify for yet another semi-final.

The NzalangNacional have won the hearts of neutrals and inspired confidence, belief and hope back home with their showing in Cameroon, hosts of this year’s edition. Having lost their opening game to Ivory Coast by a lone goal, they went up against all odds in the next group game taking on defending champions, Algeria, and deservedly got a 1-0 win that breathed life into their competition. They then went on to seal their place in the next round as group runners-up following another 1-0 win over Sierra Leone. In the Round of 16, they defeated Mali 6-5 on penalties.

Equatorial Guinea have enjoyed a storied tournament and the players, while in agony after the game, were applauded by fans present at the stadium. A confirmation of their impressive tournament and valiant displays.