Fajr said that the former coach Herve Renard designated him as the main penalty kicker, and told Fajr he would be reprimanded if he let Hamdallah take a penalty shot. 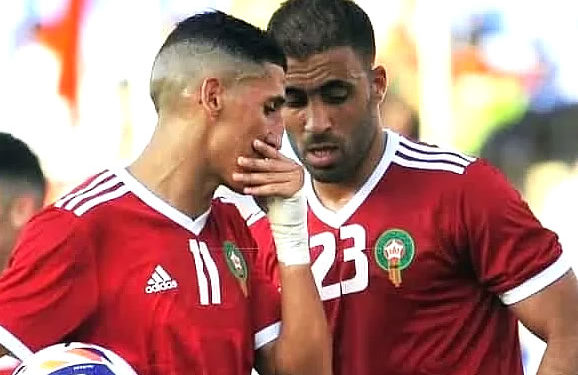 Moroccan international football player Faycal Fajr clarified a dispute he had with fellow player Abderrazzak Hamdallah during the Morocco-Gambia friendly game on June 12, 2019.

In an Instagram live stream with French-Moroccan DJ Hamida, Fajr explained that the former coach of Morocco’s national football team, Herve Renard, formed two teams to play each half. He said that Renard designated Hakim Ziyach as the main penalty kicker, followed by Younes Belhanda, for the first half.

For the second half, Herve selected Fajr as the main penalty kicker and Hamdallah as the second.

“In the dressing room, I went to Hamdallah and informed him about the problem I had with Herve Renard and Kaabi in the game against Comoros where I wanted to let Ayoub El Kaabi shoot the penalty kick,” said Fajr.

“Afterwards, Da Costa came to me to say, ‘Renard wants you to shoot the penalty kick, and even if Ayoub scores, Herve will reprimand you because your name is on the paper as the main penalty shooter.’”

Fajr elaborated that after winning the game, Renard reminded him that even though El Kaabi secured the penalty kick, Fajr would be reprimanded.

Aware of the potential consequences, Fajr asked Hamdallah to accompany him to speak with Renard and ask the coach to designate Hamdallah as the penalty shooter.

Hamdallah refused Fajr’s proposal and told Fajr that he did not need a penalty to score a goal.

At the fourth minute of extended match time, the referee whistled a penalty kick for Morocco, presenting an opportunity to tie the score.

“Hamdallah grabbed the ball. I went to him and told him that we talked in the dressing room. There is no need to create a dispute,” Fajr added.

“He was still complaining and talking behind my back over why I did not let him take the penalty,” the player said.

During the game, Fajr was seen taking the ball from Hamdallah’s hands to shoot the penalty kick, a shot that he missed. Hamdallah reportedly became upset and subsequently left the Atlas Lions, who were preparing for the 2019 Africa Cup of Nations.

Fajr continued to say that relations between himself and Hamdallah have been damaged ever since.

On November 11, 2019, the 29-year-old Safi native announced his international retirement after the new coach of Morocco’s national team, Vahid Halilhodzic, did not call him up to join the team in two friendly games.

Performing with Saudi Club Al Nassr as a striker, Hamdallah was the best scorer for the 2019 year, with a total of 57 goals, beating renowned players including Lionel Messi, Cristiano Ronaldo, and Robert Lewandowski.