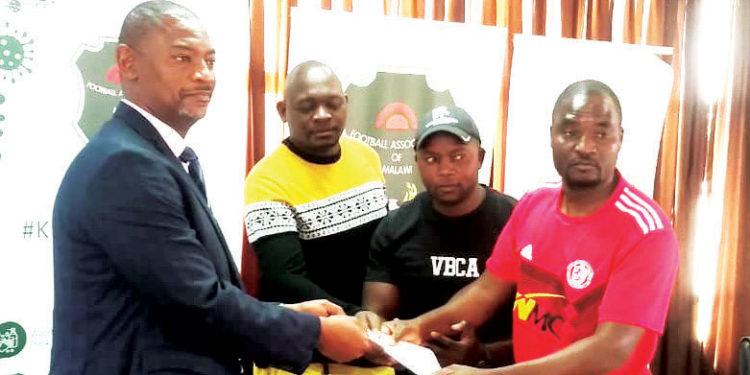 Calls for the return of football in the country grew loud, Wednesday, when the game’s supporters presented a petition to Football Association of Malawi (Fam) at Mpira Village in Blantyre.

The announcement, which was made just hours before kickoff of the 2020 season on March 21, saw Fam postponing all competitions until lifting of the suspension.

“The suspension of games has hit football teams and supporters very hard. The unfortunate part of it is that while we are adhering to government’s order to suspend football, politicians are freely conducting public rallies which are attracting thousands of people. For this reason, we are asking for the resumption of games so that we should also be doing what we love most. We promise to adhere to measures that will be put in place to stop the spread of coronavirus in match venues,” Chibambo said.

He suggested reduction of sitting capacity in stadiums as one way of controlling the number of people going to football matches.

“Increasing entry fees to matches in our stadiums is another way of ensuring that supporters observe social distancing. These are measures that can help us stay safe while continuing to watch our beloved game,” Chibambo said.

His Be Forward Wanderers counterpart, Samuel Mponda, said it was possible for Malawi football to return without endangering lives with Covid-19.

“We have seen German football making a return. We believe that our game can follow the same path. We are just a small group representing many angry fans out there who want to see the return of football. We are hopeful that you will address our concerns before we decide on taking other directions in this cause,” Mponda said.

In response, Nyamilandu urged the supporters to exercise patience as authorities ponder on the next move.

He said they are taking necessary steps to ensure that the season kicks off.

“We are equally affected with suspension of the season’s kick off. We are spending sleepless nights devising ways of mitigating the effects of the pandemic. It is understandable that supporters want football to resume and you cannot blame them because it is their passion. Our message to them is that we are doing everything possible to commence the season.

“We exist because of football and we cannot let them down. However, we would like to do things systematically in cooperating with relevant authorities. We are working tirelessly behind the scenes to put in place a plan that will take us back to our beloved stadiums,” Nyamilandu said.

He said on Saturday, Fam will be meeting a taskforce that was set up to look into issues of Covid-19.

“The committee will need to put in place guidelines and conditions of how football activities can be conducted in the safest manner possible to avoid spread of the disease. This proposal will be submitted to the government through Ministry of Sports for further consultation,” Nyamilandu said.

He therefore expressed optimism that the season would commence before September.

In a bid to alleviate challenges faced by the game’s stakeholders because of the football suspension, Fam came up with a bailout package to benefit Super League players and officials.

The stakeholders are set to receive K40,000 each per month effective next month.

Fam also partnered Rab Processors in providing relief food packs to be distributed to all premier league teams in the country for seven months.

In March this year, President Peter Mutharika announced the suspension of public gatherings exceeding 100 people as a preventive measure of the pandemic.

The suspension has seen most teams in the country struggling to pay their players and officials as they cannot generate revenue in the absence of games.