Lionel Messi returned to Barcelona training for the first time on Monday since his failed attempt to leave the club this summer. 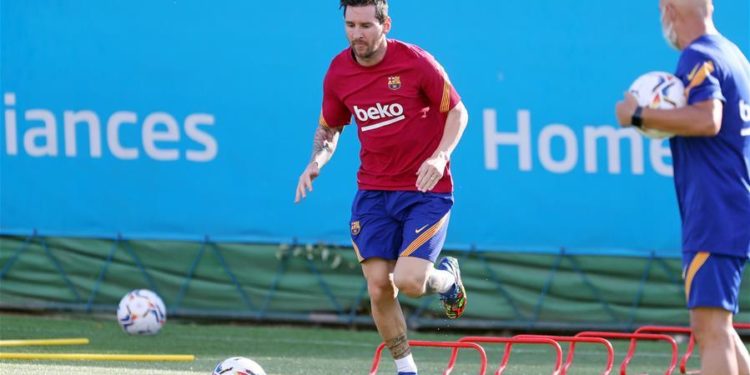 “The 2020/2021 preseason is under way for Leo Messi,” the statement read. “The Barca number 10 trained on his own, as did (Philippe) Coutinho, according to La Liga protocol whilst the rest of the squad worked out together.”

Messi was seen driving into the Ciutat Esportiva and Barca posted a photo on social media just before 6:30 pm (1630 GMT) of him training in kit and working with a ball.

The 33-year-old was taking part in his first session since Ronald Koeman was appointed coach and his first since he said on Friday he had been forced to stay at Barcelona.

In an explosive interview with Goal, Messi blamed the club’s president Josep Maria Bartomeu for “breaking his word” over a much-disputed exit clause in his contract.

He said he would continue to give his best for the team but maintained he had tried to leave the club because he “wanted to live his last years of football happily”.

The return of Barcelona’s embittered captain and greatest ever player may not be an easy one, particularly given some of his closest team-mates are likely to leave.

“Now I don’t know what will happen,” Messi said on Friday.

“There is a new coach and new ideas. That’s good, but then we have to see how the team responds and whether or not it will allow us to compete at the top level. What I can say is that I’m staying and I’m going to give my best for Barcelona.”