The Spanish Embassy in Cairo and LaLiga are searching for the "Spanish Sports Super Champion" among thousands of Egyptians. 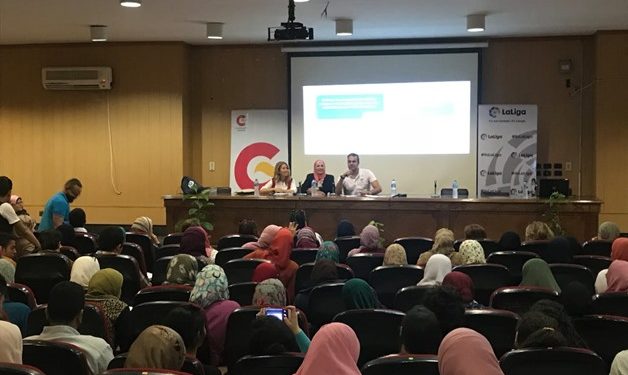 The goal is to find the three Egyptian students that show the greatest passion and knowledge of Spain’s greatest sport.

The Spanish Embassy will launch the online contest across all Hispanic Studies departments of universities across Egypt.

The challenge involves a quiz of 35 questions – most of them about football. Once the students are assigned the task, their speed and knowledge will be key to their success, with the winners from each university being those who reply the quickest and with at least 20 correct answers.

The winner of each university will be given an official LaLiga study kit.

Out of all the participants, LaLiga and the Spanish Embassy will select one winner per university, who will go on to compete in a final phase to determine three overall winners.

Those chosen from each university will be invited to a dinner and a guided tour of the LaLiga Lounge, the official LaLiga restaurant in Cairo and the only one of its kind currently in the world.

The three winners will also receive an official LaLiga premium merchandising kit and will be invited to a lunch with the ambassador.

The Spanish Embassy in Cairo and LaLiga have already rolled out a number of projects in conjunction with Egyptian universities that teach Hispanic Studies to thousands of students every year.

“This project again highlights the close and ongoing relationship between the embassy and Hispanic Studies departments at Egyptian universities that promote Spanish as a study language,” says Montserrat Momán, Cultural Counsellor at the Spanish Embassy in Cairo.

Over the past year, both institutions visited many of the universities, imparting football and culture seminars.

“It is a pleasure for LaLiga to get closer to the thousands of students who are interested in Spanish football, especially in times like these, and to offer an alternative form of entertainment to Egyptians from home aside from LaLiga matches. We will continue to work along these same lines,” added Juan Fuentes, LaLiga Delegate in Egypt.

LaLiga has been recognized as an Honorary Ambassador for Brand Spain in the category of International Relations, in a ceremony presided over by the Spanish Monarchs last March. Collaborations between different Spanish embassies and LaLiga delegations overseas have grown in recent years as a result of LaLiga’s internationalization strategy and of Spain’s important institutional presence abroad.