Equatorial Guinea's hero on the night appeared to be no other than Goalkeeper Jesus Owono as they shocked Mali in a penalty shootout to reach the quarter-finals of the Africa Cup of Nations. 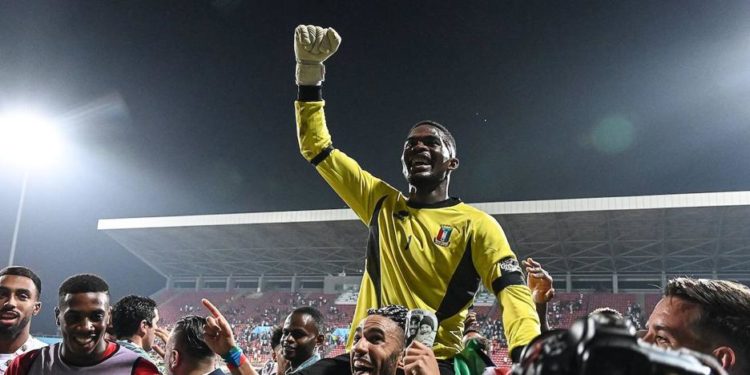 The Deportivo Alavés Goalkeeper Jesus Owono 20, lived up to his name sake ‘Jesus’ the Christian savior, saving two spot-kicks in the shootout to help them go through 6-5  on penalties after a 0-0 draw.

Equatorial hearts throbbed when the referee indicated the decisive save from Falaye Sacko’s effort needed to be retaken, but a VAR check showed Owono’s foot was on the line.

📹 𝐇𝐈𝐆𝐇𝐋𝐈𝐆𝐇𝐓𝐒: 🇲🇱 0(5) – 0(6) 🇬🇶 #TeamEquatorialGuinea reaches the quarter-finals for the third time in history after beating Mali.

To put this victory into proper perspective, the men’s football World rankings reveals a damning fact –the Malian eagles are a whooping 61 places higher than their Equatorial Guinean opponents, yet a resilient performance ensured victory for the clear under dogs.

A high-tempo but untidy first half saw Mali’s Amadou Haidara have the best chance when the RB Leipzig star was only able to scuff a weak shot from close range.

Meet Pablo Ganet,  the man of the match

Equatorial Guinea, who inflicted a first defeat in 36 games on defending champions Algeria in the group stage, have yet again knocked out another AFCON favorite.

It was a bitter disappointment for favorites Mali, who had been the better team throughout, but failed to make their quality and opportunities count.