Coleman won 100m gold at the World Championships in Doha in 2019. 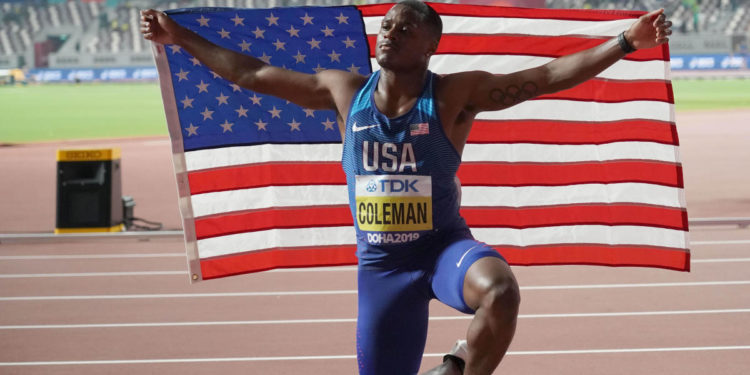 The 24-year-old American, who is suspended from 14 May 2020, will miss the postponed Tokyo Olympics next year.

The indoor 60m world record holder has 30 days to file an appeal against the Athletics Integrity Unit’s (AIU) decision to the Court of Arbitration for Sport (Cas).

Three whereabouts failures in a 12-month period can result in a ban of up to two years.

Coleman did not contest his first missed test on 16 January 2019 but disputed his filing failure on 26 April 2019 and whereabouts failure on 9 December.

The investigation into his rule violations said there was no suggestion he had ever taken a banned substance.

However, Coleman’s attitude towards his anti-doping obligations was described as “entirely careless, perhaps even reckless” by the AIU.

According to the AIU’s out-of-competition testing guidelines, athletes are accountable for missed tests if they are not at their specified location for the one-hour period they have stated. The tester must wait for the full 60 minutes before leaving.

Coleman said he was Christmas shopping “five minutes away” from home, and that the tester made no effort to contact him during his third whereabouts failure.

He also said on social media that he would be “willing to take a drug test every single day for the rest of my career” to prove his innocence.

Doping control officers said they waited outside for a full hour, ringing and knocking every 10 minutes.

The AIU said shopping receipts belonging to Coleman suggested he was “obviously” not at his home for the entirety of the one-hour period.

Coleman said he returned home before the one-hour period ended at 8:15pm because he “recalled watching the kick-off of the Monday night football game”.

However, the AIU said receipts showed Coleman purchased items at 7:53pm and 8:22pm and that it was “simply impossible” for him to have returned home in between, while the officers took a photo of his residence at 8:21pm to show it was empty before leaving.

The US Anti-Doping Agency (Usada) initially charged Coleman with missing three drugs tests in 12 months, before his world 100m victory in September 2019.

It withdrew the case after it was proved there had been a filing irregularity regarding the date of the first missed test.