Last week, the government's chief scientific adviser, Patrick Vallance, warned there was "a risk" that national measures could be needed as winter approaches. 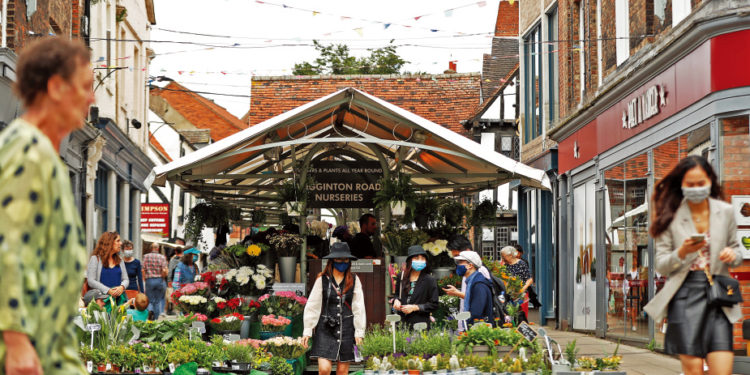 Britain’s prime minister, Boris Johnson, has compared the prospect of a second national lockdown to combat any new outbreak of the novel coronavirus as a “nuclear deterrent”, and insisted he does not want to use it.

The prime minister said he does not think the country “will be in that position again”, adding that authorities are getting better at isolating local outbreaks, but that it was important the power to order national action was held in reserve.

He told The Sunday Telegraph: “I can’t abandon that tool any more than I would abandon a nuclear deterrent.

“But it is like a nuclear deterrent, I certainly don’t want to use it, and nor do I think we will be in that position again.”

Johnson and Vallance appear to disagree on the issue of working from home with the prime minister urging people back to their office desks in August despite the top scientist saying there was “absolutely no reason” to change the current approach.

The prime minster said that experts were getting better at identifying the disease and which groups it affects and how.

“We’re genuinely able now to look at what’s happening in much closer to real time, to isolate outbreaks and to address them on the spot, and to work with local authorities to contain the problem locally and regionally if we have to,” Johnson said.

The comments come as local councils across England have been given new lockdown powers to close shops, cancel events and shut outdoor public spaces to manage local outbreaks.

Johnson on Friday said he hoped there could be a “significant return to normality” in time for Christmas.

The prime minister insisted his agenda for domestic reform and “leveling up” the economy would not be blown off course by the pandemic.

He said: “We want to be a transformative government, because there’s a massive opportunity in this country to do things differently and to do things better.

“We’ve seen that really exemplified in what happened with coronavirus.”

Foreign Secretary Dominic Raab on Sunday denied there was a split in opinion between Johnson and Vallance, and encouraged ministers to listen to the scientific advice “very carefully and seriously”.

John Edmunds, a member of the government’s Scientific Advisory Group for Emergencies, also known as Sage on Friday told the BBC’s Today program that a return to pre-lockdown normality was “a long way off”.

He said that activities such as going to work normally, traveling on public transport, going on holiday without restrictions, hugging and shaking hands with friends will not be returning any time soon.

“We won’t be able to do that until we are immune to the virus, which means until we have a vaccine that is proven safe and effective.

“If we return to those sort of normal behaviours, the virus will come back very fast,” he said.

The opposition Labour Party said the government was right to aspire to open up the economy but there were problems with its latest plans.

Shadow foreign secretary Lisa Nandy said: “You only have to go down the high street to see what the problem is.

“Many people aren’t coming out of their houses and they aren’t spending because they are nervous about what this means, whether there is going to be a second wave; whether the NHS is going to be overwhelmed, and we really do need to get to grips with the test trace and isolate system－which the government admits is not fully functional,” she told Sky News.

Catalonia’s is the worst of 150 Spanish outbreaks and neighboring France says closing borders should be discussed.

Health authorities are urgently trying to contain the surge, which has led to 4 million people around Barcelona being asked to stay home for 15 days.

Spain only ended its strict national lockdown four weeks ago and was hoping to kickstart the economy, particularly with tourism.