Covid-19: Lawyers are challenging one of the UK’s few remaining restrictions

Jurisdictions on the UK's red list, which includes 64 locations, such as Kenya, Mexico and Turkey, are deemed to be particularly badly affected by the pandemic. 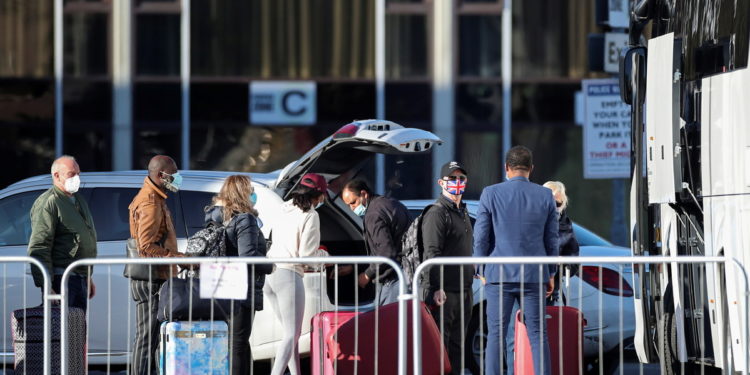 Lawyers are challenging one of the United Kingdom’s few remaining restrictions aimed at curbing the spread of the novel coronavirus: the insistence that some international arrivals submit to a period of monitored quarantine.

The BBC reported on Thursday that London-based law firm PGMBM is representing disgruntled travelers who want a judicial review of the system, which calls for people arriving from so-called red-list territories to spend 11 nights in a government-approved quarantine hotel at their own expense.

PGMBM said it believes people should not have to submit to monitored quarantine if they are able to prove they have been fully vaccinated and if they test negative for the COVID-19 disease caused by the novel coronavirus.

The firm said its legal challenge will seek payouts from the UK government, to compensate people who have been forced to endure a period of monitored quarantine. The company also wants the government to reimburse fees people have paid to quarantine providers, which currently amount to 2,285 pounds ($3,168) per person.

Tom Goodhead, PGMBM’s managing partner, told the BBC: “Mandatory hotel quarantine is a fundamental breach of human rights. It has led to the false imprisonment of people who are fully vaccinated and have tested negative.”

Goodhead said the mandated stays, in the case of people who are vaccinated and have tested negative, are unjustified and amount to an “unlawful deprivation of liberty”.

“Prisoners are entitled to more liberty than those forced to quarantine in hotels,” he added.

Only two other European nations have mandatory monitored quarantine programs in place-Ireland and Norway-and The Guardian newspaper noted that both have now exempted arrivals who are double-jabbed and who test negative for the disease.

The UK government responded to reports of PGMBM’s legal challenge by issuing a statement in which it said: “We are determined to protect our country and the progress we have made thanks to the vaccine rollout. That is why the government has taken decisive action at the border, including the introduction of the managed quarantine system.”

The METRO newspaper noted quarantine hotels have been in the news a great deal recently, with guests complaining about female residents being harassed by male security guards, and with people bemoaning the quality of food, and a lack of drinking water.

London’s Evening Standard newspaper said PGMBM’s legal challenge is its second in connection with the government’s monitored quarantine program. Earlier, the law firm successfully complained that the initiative caused people financial hardship, which led to the government offering travelers the option of paying fees over a 12-month period.