French health authorities also ceased the use of hydroxychloroquine in COVID-19 patients this week, after the World Health Organization paused its own international trial for the drug on Monday. 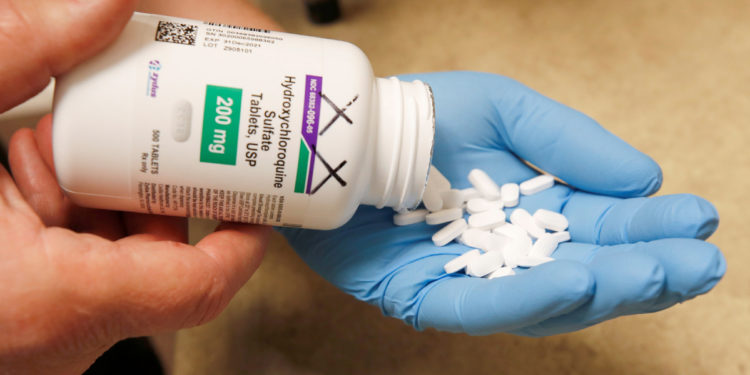 The United Kingdom drug regulator has ordered Oxford University to pause a trial into the use of hydroxychloroquine as a treatment for the novel coronavirus-caused COVID-19 disease amid safety concerns about the medication.

The UK Medicines and Healthcare products Regulatory Agency, or the MHRA, took the decision just six days into the Oxford trial, which is called the Chloroquine/Hydroxychloroquine Prevention of Coronavirus Disease, or COPCOV, and is being conducted in collaboration with the Mahidol Oxford Tropical Medicine Research Unit, or MORU, in Thailand.

“The COPCOV trial, led by the University of Oxford and Wellcome-supported MORU in Bangkok, has been paused,” the MHRA said in a statement. “All hydroxychloroquine trials in COVID-19 remain under close review.”

The WHO suspended its so-called Solidarity Trial following a study published last week in medical journal The Lancet, which found that hydroxychloroquine provided no benefit for treatment of the virus and was associated with higher mortality and increased frequency of irregular heartbeats among COVID-19 patients.

“In light of recent publications of evidence on the safety and efficacy of hydroxychloroquine as a treatment for COVID-19 patients, the executive group of the Solidarity Trial decided to implement a temporary pause of the hydroxychloroquine arm within the trial as a precaution while the safety data is being reviewed,” the WHO said in a statement.

The WHO said its review on hydroxychloroquine is ongoing and a final decision on its harm or lack of benefit can be expected in mid-June.

Hydroxychloroquine is a drug best known for its use to treat and prevent malaria, and it is also used to treat some autoimmune diseases including rheumatoid arthritis and lupus.

During the pandemic, scientists have studied a multitude of existing drugs to see if they might be effective against COVID-19. In early March, in vitro-or test tube experiments-by researchers in China and some early trials on COVID-19 patients in France showed promising results for hydroxychloroquine.

The medication entered mainstream headlines on March 19 when United States President Donald Trump said the US Food and Drug Administration was looking to approve its use as a treatment for COVID-19. This month, Trump said he has been taking hydroxychloroquine to defend against the novel coronavirus.

The drug is now being used to treat the disease in hospitals in several countries, though there have been limited studies into the medication as a COVID-19 treatment and no conclusive evidence has emerged regarding its efficacy.

Oxford University commenced its trial in patients older than 50 last week, days after The Guardian newspaper reported that the UK government had spent more than 2 million pounds ($2.5 million) for hydroxychloroquine contracts.

The Lancet study came out on Friday, casting serious doubts over the benefits of hydroxychloroquine for COVID-19 patients.

The study, which was conducted by researchers from Harvard Medical School and the University of Utah in the US and University Hospital Zurich in Switzerland, looked at just more than 96,000 COVID-19 patients from 671 hospitals in six countries.

The majority of these patients were in the control group of the study, while just less than 15,000 patients had been treated with either hydroxychloroquine or another anti-malarial drug known as chloroquine. Some of the patients had received one of these drugs in combination with an antibiotic called macrolide.

The study was unable to confirm a benefit of hydroxychloroquine as a treatment for the disease, and the drug was associated with a higher mortality rate and heart problems in COVID-19 patients.