The pandemic, which has spawned health and economic mayhem worldwide, also resulted in the G20 considering extending debt relief for coronavirus-hit poor countries in the second half of this year. 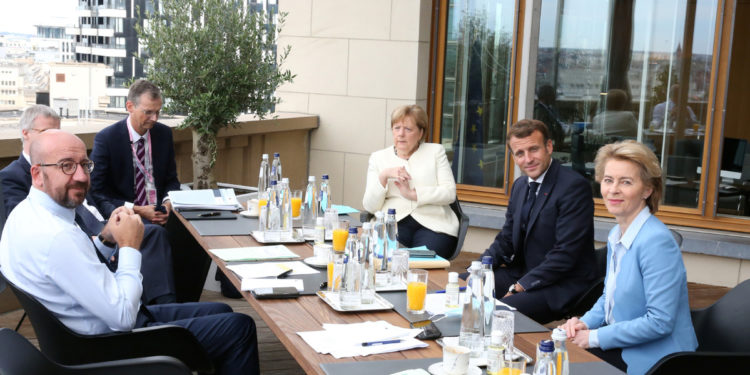 EU leaders in Brussels remained deadlocked on Saturday over the COVID-19 recovery plan because of resistance from Austria, Denmark, Finland, Sweden and the Netherlands.

European Council President Charles Michel was expected to propose another plan to the 27 leaders at noon on Sunday after his blueprints for a 750-billion-euro ($850 billion) package were refused by the richer northern member states.

Michel’s latest proposal would keep the total recovery budget at 750 million euros, but shift the balance slightly from grants－down from 500 million to 450 million－to loans, which would rise from 250 million to 300 million, according to a document.

German Chancellor Angela Merkel said in Brussels on Sunday that it was possible that EU leaders would not reach agreement on their third day of talks on plans to boost the bloc’s economies.

“There is a lot of goodwill but also many positions. I will make every effort, but it is possible that there is no result.”

French President Emmanuel Macron said on Sunday that there was a willingness to compromise for agreement on an economic recovery fund at the European Union’s summit, but it should not come at the cost of ambition for the bloc.

EU oversight is necessary to oblige countries such as Spain and Italy to reform their economies to handle future crises better, he said.

Michel’s latest plan included a “super emergency brake” that gives any country a three-day window to trigger a review by all member states of another’s spending plans.

Barcelona, one of Europe’s most visited cities, in effect went back into lockdown on Saturday.

Spain’s death toll of more than 28,400 is one of Europe’s worst, and more than 150 new virus clusters have been identified across the country in recent days.

The regional government of Catalonia urged nearly 4 million residents of metropolitan Barcelona to stay home unless absolutely necessary, banning gatherings of more than 10 people and shutting cinemas, theaters and nightclubs.