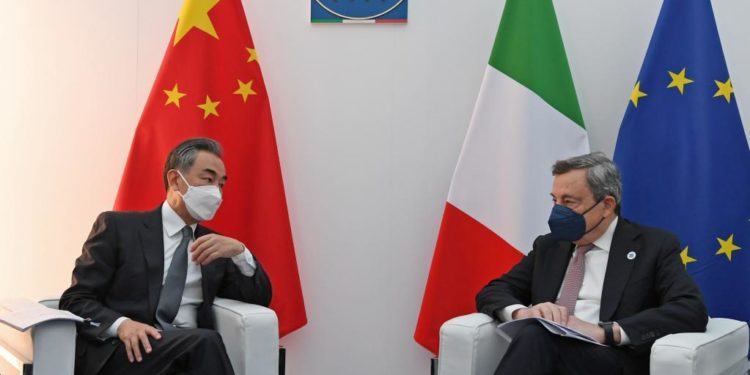 Wang said China-Italy relations have maintained a good momentum of development. Both countries are ancient civilizations and they can look at each other’s development with an inclusive attitude and accept each other’s differences peacefully.

The Chinese minister said the two sides should support each other in their respective hosting of the Beijing Winter Olympics and the Milan Winter Olympics, and take care of each other’s core interests, expressing hope that Italy will continue to adhere to the one-China policy.

Draghi agreed that Italy and China should be open, respect and support each other, saying that Italy adheres to the one-China policy and supports the Beijing Winter Olympics.

Noting that Italy will not adopt discriminatory policies against Chinese enterprises, Draghi said his country is willing to strengthen communication and coordination with China on tackling climate change and other issues.

The two sides also exchanged views on relations between China and the European Union (EU).

Stressing that China and the EU are partners and collaborators rather than rivals and competitors, Wang expressed hope that the European side will uphold strategic autonomy, exclude interference from all sides, and build consensus on dialogue and cooperation. Wang added that he believes Italy will play a positive role in the sound development of China-EU ties.

Draghi said Italy supports strengthening the EU-China strategic partnership and is ready to work with China to plan and prepare for the next stage of important agendas between the two sides.