Israel says to trial Covid-19 vaccine from next month

Israel will begin its first clinical trials of a novel coronavirus vaccine next month, authorities said Sunday, as the country grapples with a second wave of infections. 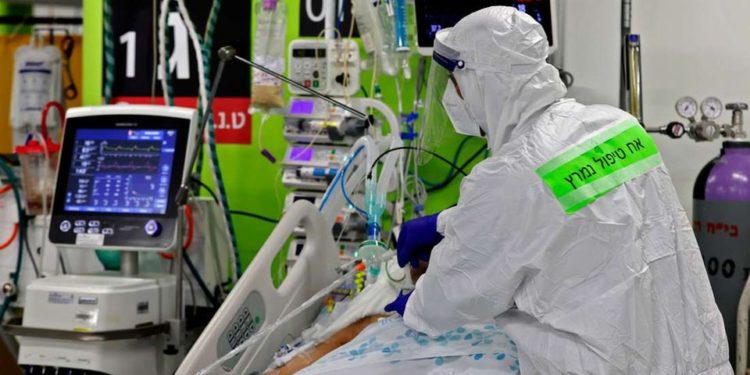 A member of the medical staff wearing protective gear cares for a patient at the coronavirus ward of the Rambam Health Care Campus, initially built as an underground medical facility before being converted to a car park, then to a center to receive patients as COVID-19 cases surge, in the northern Israeli city of Haifa on October 11, 2020. - Israel opened a new coronavirus treatment facility co-run by the army's medical corps, an unprecedented move for the military unit, aimed at bolstering an embattled healthcare system. The Jewish state currently has one of the world's highest daily coronavirus infection rates per capita, with the number of seriously ill patients steadily rising. The army-backed unit at the Rambam Hospital in the northern city of Haifa includes a control room where patients are monitored via video and an underground coronavirus ward that used to be a car park. (Photo by JACK GUEZ / AFP) / MANDATORY MENTION OF THE LOCATION UPON PUBLICATION "Rambam Health Care Campus"

Early in the pandemic, Israeli Prime Minister Benjamin Netanyahu tasked the Israel Institute for Biological Research (IIBR) with developing a vaccine against the virus.

Covid-19 has killed over 2,370 people in the Jewish state since the start of the outbreak there, and has infected more than 300,000, according to official figures.

On Sunday, authorities announced that the first clinical trials of the “BriLife” vaccine would begin on November 1, as a spokesperson for the defence ministry said the “necessary approvals” had been granted.

The trials will be conducted over several months.

“Our final goal is 15 million rations for the residents of the state of Israel and for our close neighbours,” IIBR head Shmuel Shapira was quoted as saying in a statement.

Scientists around the world are racing to develop a vaccine against Covid-19, which has killed over 1.1 million people.

Several dozen vaccine candidates are currently being tested in clinical trials, ten of which are in the most advanced “phase 3” stage involving tens of thousands of volunteers.