Biden and the 55-year-old senator from California — the first black woman and the first Asian American on a major party's presidential ticket — appeared in Wilmington, Delaware, at a high school near Biden's home. 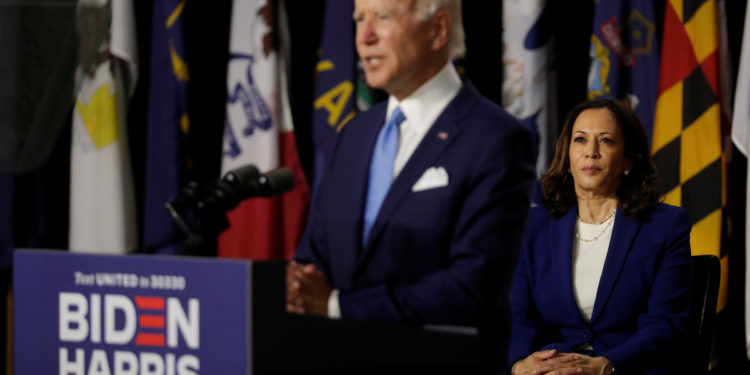 Former vice-president Joe Biden and Senator Kamala Harris on Wednesday made their first public appearance as Democratic running mates, praising one another and each attacking President Donald Trump on issues ranging from the economy to his handling of the COVID-19 pandemic.

It was attended only by news media and campaign staff, as well as Biden’s and Harris’ spouses, Jill Biden and Doug Emhoff, a lawyer, due to social distancing protocols during the pandemic.

Their speeches were delivered in a silent room and livestreamed to a virtual audience. Biden and Harris did not shake hands and, for the most part, stayed more than 6 feet apart.

“I have no doubt that I picked the right person to join me as the next vice-president of the United States of America,” Biden said. “One of the reasons that I chose Kamala is that we both believe that we can define America simply in one word: possibilities.”

Biden said that his son Beau’s respect for Harris heavily influenced his choice. Harris and Beau Biden knew each other when both served as state attorneys general — Harris in California, and Biden, who died of brain cancer in 2015 at age 46, in Delaware.

Harris said that Beau Biden told her often of his father’s empathy for his family and the American people.

Biden also said he expected Harris, with whom he clashed during the Democratic debates, to challenge him at times.

“I asked Kamala to be the last voice in the room, to always tell me the truth — which she will — to challenge my assumptions if she disagrees, to ask the hard questions,” Biden said.

In her remarks, Harris cast blame for the American death toll from the novel coronavirus — nearly 166,000 have died so far — and the country’s economic trouble on Trump.

She explained her vision of the choice for Americans between Biden and Trump.

“This is a moment of real consequence for America. Everything we care about — our economy, our health, our children, the kind of country we live in — it’s all on the line,” she said.

“America is crying out for leadership, yet we have a president who cares more about himself than the people who elected him.”

She said Biden, despite the personal tragedies he has faced, never focuses on himself.

“He’s someone who never asks, ‘Why is this happening to me?'” Harris said. “And instead asks, ‘What can I do to make life better for you?’ His empathy, his compassion, his sense of duty to care for others is why I am so proud to be on this ticket.”

Before introducing Harris, Biden went after Trump for attacking her.

“Kamala Harris has had your back, and now we have to have her back. She’s going to stand with me in this campaign. And all of us are going to stand up for her,” he said.

“Is anyone surprised Donald Trump has a problem with a strong woman or strong women across the board?” Biden asked.

“And this morning, all across the nation, little girls woke up, especially little black and brown girls who so often feel overlooked and undervalued in their communities, but today, today, just maybe they’re seeing themselves for the first time in a new way,” Biden said.

Soon after Biden announced his choice of Harris as running mate Tuesday, Trump described her at a news conference four times as “nasty” or “nastier” and complained that she had not been nice to his Supreme Court nominee Brett Kavanaugh during confirmation hearings.

A few minutes later, the president characterized Harris as the “meanest” and “most horrible” and claimed she was “disrespectful” in her attacks on Biden during one of the Democratic debates.

On Wednesday morning, Trump cast her as a dream opponent, pointing to her lackluster showing in the 2020 Democratic primaries.

“@KamalaHarris started strong in the Democrat Primaries, and finished weak, ultimately fleeing the race with almost zero support,” Trump wrote on Twitter. “That’s the kind of opponent everyone dreams of!”

Shortly after calling Harris the “most liberal” member of the Senate on Tuesday, the Republican National Committee sent out an email saying that progressives opposed her because she was not progressive enough.

Between 2011 and 2014, Trump and his daughter Ivanka gave thousands of dollars to her campaigns for attorney general.

Vice-President Mike Pence told an Arizona audience after Biden’s announcement on his choice of Harris that it was “no surprise”.

“As you all know, Joe Biden and the Democratic Party have been overtaken by the radical left. So given their promises of higher taxes, open borders, socialized medicine and abortion on demand, it’s no surprise that he chose Senator Harris,” Pence told a crowd in Mesa, Arizona.

“You all might like to know that the vice-presidential debate is on Oct 7 in Utah! So my message to the Democratic nominee for vice-president: Congratulations. I’ll see you in Salt Lake City!”