President Trump loves to repeal and disassemble his predecessor’s initiatives, so it may surprise many that he has allowed President Obama’s two signature African programs 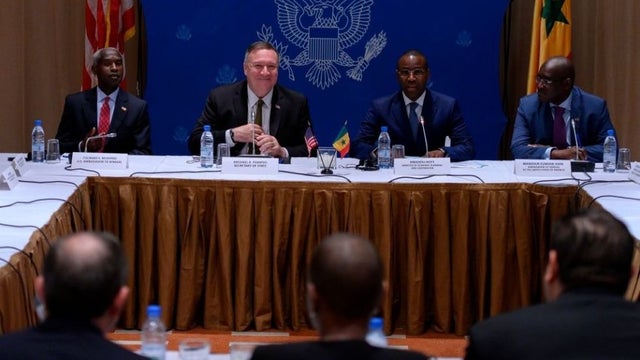 Skepticism over President Trump’s policy regarding Africa followed Secretary of State Mike Pompeo on his February trip to the continent. “China is the only constant of Trump’s US-Africa policy,” opined Yomi Kazeem and Yinka Adegoke in a representative piece for Quartz Africa. “On the last day of his visit, Pompeo took a thinly veiled swipe at China, warning African countries to be wary of ‘empty promises’ by authoritarian regimes,” they wrote, without raising the question of what happened on every other day of Pompeo’s tour.

This is a longstanding phenomenon: For years, commentators have been split on whether the Trump Africa policy is nonexistent or is awful. Journalist and Columbia University professor Howard French decried a state of “absentee diplomacy,” asserting that “since the end of the Cold War, the United States has steadily grown more and more disengaged with Africa. … Most of America’s diplomacy in Africa seems to be run out of the Pentagon.” Former NSC Africa director Grant T. Harris said it’s “difficult to take the Trump administration seriously given its poor record on Africa so far.”

It is tempting to conclude that this administration doesn’t care about the continent, but this interpretation is unsupported by the facts. There may be cause for concern, but it is misleading to characterize the administration’s Africa policy, in full, as withdrawn or counterproductive. Congress can check the president’s less prudent impulses. Analysts and African leaders should look beyond political acts such as travel restrictions and fiery rhetoric about China to find that that U.S.-Africa policy, in substance, remains strong, defined by both its constants and new initiatives.

In Ethiopia, Pompeo pledged financial support for political reforms; in Senegal, he offered security assurances and announced new private investments; in Angola, he held talks on economic ties and President Lourenço’s campaign against corruption. Meanwhile, Trump himself is getting hands-on with trade negotiations and conflict resolution, launching a signature Africa program, making vigorous use of envoys to promote U.S. interests, and allowing the major African aid initiatives of past presidents to continue unabated.

President Trump loves to repeal and disassemble his predecessor’s initiatives, so it may surprise many that he has allowed President Obama’s two signature African programs — Power Africa, which promotes electrification, and Feed the Future, which works to modernize agriculture — to continue unabated. Meanwhile, President George W. Bush’s Millennium Challenge Corporation continues to invest in infrastructure improvements for African countries that meet tough criteria for political freedoms, human rights and the rule of law.

The President’s Emergency Plan for AIDS Relief (PEPFAR) program, inaugurated by Bush, is an instructive example of Trump’s approach to aid. PEPFAR is a U.S.-Africa success story: A politically unanimous campaign against HIV/AIDS that, as of November 2018, has saved 17 million lives, largely in Africa.

Each budget under Trump has proceeded in the same way. Trump calls for massive cuts to foreign aid. The media are aghast. Congress largely ignores this proposal — even in a polarized Washington, support for Africa is profoundly bipartisan — and the aid continues. PEPFAR reveals all this may be for show. In December 2018, when Congress reauthorized PEPFAR through 2023, Trump signed the bill without objection.

Some have interpreted the fact that Trump has not terminated Obama and Bush programs as a sign that he is simply ignoring Africa. Yet this notion flies in the face of substantial active foreign policy efforts there by his administration.

Former United Nations Ambassador Nikki Haley was deployed to successfully persuade the Democratic Republic of the Congo’s Joseph Kabila to allow elections and a transition of power. Trump himself is currently mediating a controversy between Egypt and Ethiopia over the latter’s plan to dam the Nile River. Trade sanctions have been enacted against Cameroon for its human rights abuses. Trump appointed diplomat Tibor Nagy to the position of Assistant Secretary of State for Africa, which I once held, and special envoys to address issues in Sudan, the African Great Lakes, and the Sahel region. In December 2018, the administration announced its Prosper Africa program.

This program seeks to promote private U.S. investment on the continent, a laudable goal, for the purpose of “great power competition” with Russia and China, a less straightforward proposition. It is still too early to determine whether the development goals at hand are viable. The initial budget of just $50 million is small. Moreover, foreign investment in Africa beyond oil and minerals is commonly deterred by a lack of infrastructure, labor deficiencies, and deficient rule of law. It is unclear whether this program can improve investor confidence in these fundamentals, and it is misguided to use Africa policy as a cudgel for great power competition. But private U.S. investment in Africa is hugely beneficial for both economies, and there is great potential in any program to stoke it.

One of the greatest sources of anxiety in the U.S.-Africa relationship appears to be abating. The administration had announced a drawdown of U.S. troops assisting African militaries in the volatile Sahel region, just south of the Sahara Desert, in their fight against terrorists affiliated with al Qaeda and the Islamic State. Contrary to the theory that the Pentagon is running Africa policy, it is an open secret that top Pentagon officials found this move ill-advised. In Senegal, Pompeo seemed to suggest his own displeasure, remarking that “I was here as CIA director, so I know these security issues very, very well. … We have an obligation to get security right here.”

As with the proposed foreign aid cuts, while this move made quite a splash in the media, it is unlikely that Trump will press the issue with cooler heads in Congress. A bipartisan group of House lawmakers has introduced the U.S.-Africa Strategic Security Act, requiring the Department of Defense secretary to explain, in an unclassified report, how a drawdown would affect the counter-terror fight before any troops can be pulled out. Sen. Lindsey Graham (R-S.C.), chair of the Senate’s Africa Subcommittee, recently denied reports that he threatened to make Defense Secretary Mark Esper’s life “hell” if he proceeded with the drawdown. It is unlikely a withdrawal will proceed under these circumstances.

President Trump has threatened to remake U.S.-Africa relations with characteristic bravado, but so far, a bite has not followed this bark. Congress is preventing any apparent moves to reduce development and military aid. Far from ignoring or spurning Africa, Trump has fought to end conflicts, appointed a skilled Africa hand to run his policy, and is negotiating trade deals — all while aid continues to flow. These are not the telltale signs of withdrawal or disengagement.